Spring in a Small Town

Spring in a Small Town - trailer 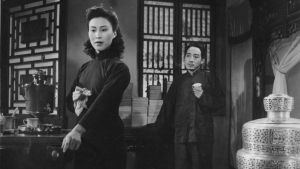 Now regarded as one of the greatest films to emerge from pre-Communist China, this marital melodrama had few admirers on either side of the Chinese Civil War. Indeed, Fei Mu’s 1948 depiction of a love triangle disappeared from public circulation for decades, only to re-emerge with Beijing’s Fifth Generation directors, a group who appreciated the old master’s flair with period costumes and wistful heroines.

Grammatically, Spring in a Small Town alternates between pained close-up and inner monologue. Yuwen (Wei Wei), the film’s heroine, is trapped in a loveless marriage to Liyan , a TB afflicted invalid who spends his days in the ruined courtyard of what was once a stately family home. Neither is happy: Yuwen laments that she doesn’t have the courage to die; her husband lacks the courage to live.

When Liyan’s old pal Zhang, a doctor, comes to visit, he immediately attracts the flirtatious attentions of Liyan’s younger sister. We know, however, that his heart belongs elsewhere: Liyan is unaware that his friend was engaged to Yuwen before the war.

The unadorned, pre-institutional storytelling makes for a far more compelling viewing than Tian Zhuangzhuang’s 2002 glossy remake. The latter has nuance, but authenticity trumps heritage. Fei Mu’s film, like its characters, is caught between an ancient society destroyed by the second World War and the incoming new world order, a hinterland conveyed by Wei Wei’s wonderfully expressive face.