Spotlight: exposing a sex-abuse scandal, one story at a time

Marty Baron drove the Boston Globe’s relentless reporting of the Catholic Church’s cover-up in the US. The paper’s hard slog is now the subject of a Hollywood hit 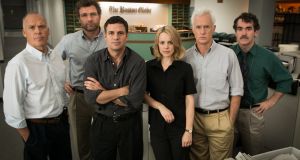 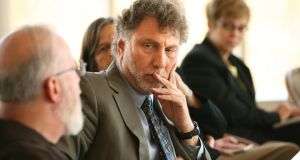 In the spotlight: Marty Baron listens as Cardinal Sean O’Malley speaks during a meeting between the Boston Globe and the Catholic heirarchy in 2006. Photograph: Dina Rudick/Boston Globe via Getty

Shortly after the Boston Globe began to break stories about sexual abuse by priests and the decades-long cover-up by the Catholic Church, in 2002, the newspaper’s editor, Marty Baron, received a letter.

It was from a prominent Bostonian, complaining about the coverage by the newspaper and its Spotlight investigative team. He wrote that such a story would never have been pursued under previous editors of the Globe. The editors all had Irish Catholic names.

“I was very upset over that letter and sent a stern letter in response,” says Baron, who is now executive editor of the Washington Post. It was a clear warning that he was taking on something sacred in Boston. At the time of the exposé Baron was less than a year in the editor’s seat at the Globe.

The veteran newspaperman, who is Jewish, interpreted the letter as “borderline anti-Semitic, if not over the line”. When they met, the man insisted that his letter was not meant that way, and apologised.

Baron’s decision to pursue the investigation and rattle Boston’s biggest cage was ultimately vindicated. The reports revealed the sexual abuse of hundreds of people by dozens of priests. They told how the city’s Catholic hierarchy had turned a blind eye and even permitted the abuse, shuffling serial-molesting priests around parishes.

The investigation, now the subject of the Oscar-nominated film Spotlight, which opens in Ireland next week, later won the Globe a Pulitzer Prize. It led to the resignation of the archbishop of Boston, Cardinal Bernard Law, and opened the floodgates on other clerical abuse across the United States, transforming the scandal from a few isolated cases into a national and international crisis for the church.

The movie is the best depiction of the tedious and at times mind-numbing work of investigative journalism since All the Presidents Men, 40 years ago. It may be hard to imagine how trawling archives and compiling spreadsheets could be the subject of a Hollywood thriller, but its director, Tom McCarthy, wrings a taut drama from the subject matter.

“I have to trust the judgment of people who work with me and know me. And pretty much everyone uses that phrase ‘He nailed you’,” the softly spoken editor says of Schreiber’s portrayal.

Sitting in his Washington Post office, Baron recalls his decision to put the Spotlight team on the story on his first day on the job.

The day before, Baron had read a column by the Globe writer Eileen McNamara, who noted that Mitchell Garabedian, the attorney for one of the victims of Fr John Geoghan, had accused Cardinal Law of reassigning the priest, notwithstanding his abuse. The columnist concluded by saying that the truth may never be known because the documents showing what the church knew in the Geoghan case, and when, remained under seal in court.

May never be known

“To me that’s like chum for journalists,” Baron says. “How can you let it rest saying that the truth may never be known? The question was whether the cardinal himself knew about this abuse and yet allowed the reassignment of this priest over and over again, despite evidence of serial abuse.”

Acting on what he calls journalistic impulse, Baron, at his first daily meeting with the Globe’s editorial staff, asked whether the newspaper had filed a motion to unseal the documents, similar to actions taken in Florida, where he had been editor of the Miami Herald.

“I remembered very distinctly that there was incredible silence, because I think people were stunned that I was bringing up the prospect of going to court against the Catholic Church on my first day at my first meeting, given that the Catholic Church was the most powerful institution in Boston. I don’t know what people expected from an editor on the first day, but not that.”

Baron had come to the city with no attachments to Boston and not really knowing anybody at the Globe. He wasn’t aware of any long-standing relationship with the Catholic Church either. And it was a risky subject for the newspaper: more than half of its subscribers were Catholic. Baron saw it simply as a good story worth pursuing.

Spotlight shows that the Globe had covered the abuse issue previously but not followed up. Driven by Baron’s quiet resolve, however, the reporters were encouraged to return to people they had spoken to before, to join the dots and to look at the bigger picture: the church.

“My former colleagues in Boston have said I came in with fresh eyes. I saw an opportunity journalistically to get at the truth,” he says.

Driving the investigation, Baron acted as the story’s compass, guiding his journalists to report not just on the number of victims.

Baron’s back-of-an-envelope calculation is that the Globe’s investigation probably cost $1 million over the first year and a half, including legal expenses incurred on the motion to unseal the documents. This was crucial, as it yielded a trove of important internal records revealing the extent of the church cover-up.

Despite the decline of the print media from falling circulation and advertising revenue, Baron believes it is possible for midsized news organisations to carry out Spotlight-style investigations.

“That is a matter of will,” he says. “Can it be done? Yes. Is it done as often as it should be? No. There are still, certainly in the United States, newspapers and other news organisations of one type or another who are doing good investigations, but it doesn’t happen nearly with the frequency that it should.”

After 11 years and six Pulitzer Prizes at the Globe, Baron became editor of the Washington Post in 2012. Certainly, he acknowledges, it is harder in the Twitter age to devote resources to deep, long-running investigations. The pace of journalism and the greater competition make it difficult.

“There’s financial pressure which doesn’t allow nearly enough reporters to get out of the office and go do real reporting: spend time in courthouses, interview people door to door, those sorts of things,” Baron says.

“Too many news organisations think they can cover their communities, their country and the world by never leaving the office. It is not possible.”

Baron believes the Catholic Church has not gone far enough to address the scandal. It was only last summer that the church set up a tribunal to evaluate the bishops who covered up abuse.

There should also, he says, be more efforts to address the issue in countries in the developing world, where it has “received far less attention than it has in the US, in Ireland and in Europe generally”.

When not editing one of the United States’ most respected newspapers, Baron is closely watching the success of the Spotlight movie at the Oscars and other awards, in the hope that it causes the news industry to rededicate itself to investigative reporting.

“I hope it causes the public to reflect on the necessity of holding powerful people and institutions accountable, and on the nature of investigative reporting and what’s required to do it right,” he says.

“I hope it causes all of us, including people in the press, to listen to people who are at the margins of society, who have been routinely left voiceless, who actually have something very powerful to say.”