Souvenir: a bizarre Eurovision comedy, with terrible music to boot 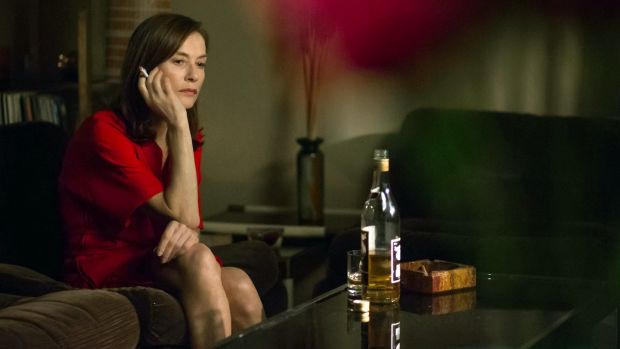 There is some hope in the world. A few years into her seventh decade, Isabelle Huppert – without being shuffled into dowager roles – finds herself busier and more celebrated than ever. Her current status probably explains why this substandard mainstream French film has made it into Irish cinemas. It’s not the worst thing you’ll see this year, but it does nothing to justify its export beyond home territories.

Souvenir hangs around a decent idea for a sentimental drama and it starts perfectly pleasantly. Lilliane, once the French representative at the Eurovision Song Contest, now works in a factory placing the final garnish on tureens of pâté. A nice young co-worker called Kevin (Kévin Azaïs) recognises Lilliane and invites her to sing at his boxing club. For some reason that (not for the last time) is unsatisfactorily explained, she agrees and belts out her early hit to the crowd.

What happens next is profoundly perplexing. How can we put this delicately? For all her considerable talents, Huppert will never be mistaken for Shirley Bassey. I won’t say she can’t sing a note.

But nobody would invite her back for a second go on the karaoke machine at the Mullingar Arms. Is she supposed to be bad? Apparently not. She is swept along towards qualification heats for the next Eurovision.

Everything about the film’s later stages feels phoney. Lilliane’s reunion with an old songwriting colleague comes out of nowhere. That character’s undeniable corruption – he acts as Eurovision judge despite secretly writing an entry – is never satisfactorily addressed. The novelty song in question would qualify for no Eurovision later than 1988.

Still, Huppert’s gutsy performance opposite a younger male lead did get me thinking. Never mind that Lady Gaga thing. How great would it be to see a gender-reversed remake of A Star is Born with Huppert as Norma Maine?

Mind you, it might be best to use the 1937 version as a model. That’s the one without songs.