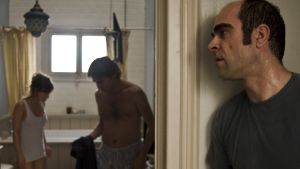 Sad-sack concierge César (Luis Tosar) tends to a marble-floored Barcelona apartment block and its well-heeled residents. In return, they show little by way of gratitude: one little girl glowers at him with murderous dislike every time she passes his desk; an elderly lady demands his assistance with her dog’s precise dietary requirements.

If only they knew that César, their anonymous, obsequious domestic, is more than capable of abusing his position and has ready access to their various abodes. This is particularly true when it comes to Clara (Marta Etura), a perky, pretty resident who loves to dance around in her underwear, oblivious to the fact that César is watching from the darker corners of the room.

“The only thing that helps me is that others are unhappy, too,” says César, who waits silently under Clara’s bed every night, chloroform at the ready, before depositing cockroaches in her cupboards, poisoning her body lotion and curling up beside her in bed.

César also bombards his target with abusive text messages, which brings the police a-calling. Will the cops or Clara’s new boyfriend finally put a dent in César’s plans? Or will he succeed in driving the poor girl to the breaking point?

A superior Spanish thriller, Sleep Tight is as beautifully crafted as we’ve come to expect from that reliable sector. Director Jaume Balagueró turns the screws as this thoroughly Hitchcockian psych-out creeps toward its twisted denouement. Cinematographer Pablo Rosso sneaks and hides along the way. Alberto Marini’s script provides a steady escalation.

The film belongs to Tosar. The actor’s tremendous central turn is sheer cinematic Stockholm Syndrome. As with Patricia Highsmith’s Ripley, we’re locked into ghoulish César as outside forces close in, knowing full well that his caterpillar eyebrows and subservient manners mask all manner of monstrous proclivities.

In a film defined by malevolent tricks and turns, getting us to tag along with the monster’s demented ambitions is the most impressive sleight of them all.