Sausage Party is a tasty proposition. Just don’t expect too much subtlety as the animated adventure plays itself out 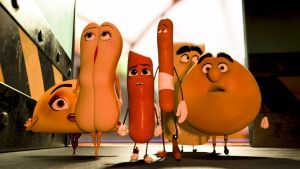 Talking comestibles (voiced by some of Hollywood’s finest) are the stars in ’Sausage Party’, an enjoyable spoof let down by a corny chase ending

For almost an hour Sausage Party is the full kielbasa: a daring satire of religious beliefs and, simultaneously, a hilarious, adults-only spoof of Pixar’s winning ‘What if x had feelings?’ product line. There’s even a full-blown, old-school Disney number wherein supermarket produce welcome another day.

The x in question are perishable items in a large American grocery store, notably Frank (Rogen), a lowly frankfurter who dreams only of having sausage-sex with his hot dog bun girlfriend, Brenda (Wiig). Frank and Brenda are delighted when one of the “gods” who frequent their outlet, pick them up just ahead of “red, white and blue” day. But their enthusiasm for the ‘Great Beyond’ that awaits is dampened by dire warnings issued by a returned jar of honey-mustard (McBride) and a violent encounter with an obnoxious douche.

Stranded, the goods – now accompanied by a lavash (Krumholtz) and a bagel (Norton) – must make their way back to their own aisle.

At its best, Sausage Party takes entertaining sideswipes at blind faith: when Frank asks why the neurotic bagel and the lavash (who has been promised 100 bottles of virgin olive oil in the great beyond) can’t live together in what looks like a “big enough aisle”, the warring carbs momentarily bond in derisive laughter.

Still, even at a taut 86 minutes, Sausage Party lacks girth and momentum. Once the film ventures beyond the cabinets of its big-box environment, it soon dilutes its central joke by introducing, well, everything, as a character. We’ve only just clambered aboard the idea of talking comestibles as characters when we’re introduced to speaking-part used condoms. If discarded prophylactics are conscious then why not tables?

This lack of consistency might have flown if the final 20 minutes weren’t mostly given over to an exhausting chase sequence. Nobody expects a movie about deli items to behave like Out of Africa, but about 20 per cent less anarchy. 30 per cent more jokes, and 40 per cent more story would have made for better viewing.

Do watch out for the ill-starred Irish potato: Sausage Party was co-directed by Dubliner Greg Tiernan and we’re just one of the many, politically incorrect casualties. It’s not racist when everybody gets roasted (sometimes literally), right?