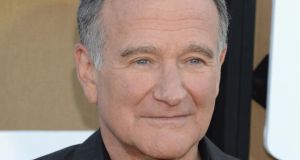 Police in Northern California found Robin Williams’ body at his home after responding to an emergency call at 11.55am local time. Photograph: Getty

Oscar-winning actor Robin Williams, the acclaimed star of films such as Good Morning Vietnam and Dead Poets Society has died of an apparent suicide, aged 63.

Police in Northern California found Williams’ body at his home after an emergency call at 11.55am local time. According to a statement from Marin County Sheriff’s Office, the call reported a male adult had been located unconscious and not breathing at his residence in Tiburon, California.

Emergency personnel arrived on the scene within five minutes. “The male subject, pronounced dead at 12:02am, has been identified as Robin McLaurin Williams, a 63-year-old resident of unincorporated Tiburon,” the statement said.

The Sheriff’s Office said it suspected the death to be a suicide due to asphyxia, but added that a comprehensive investigation must be completed before a final determination is made. A forensic examination is due to take place today, and toxicology tests will also be carried out.

Mr Williams, who has struggled with addictions in the past, was reported last month to be attending a rehab clinic.

He was nominated for the Academy Award for Best Actor three times, and won the best supporting actor award in 1997 for his role in Good Will Hunting. He also received two Emmy Awards, four Golden Globes, two Screen Actors Guild Awards and five Grammy Awards.

Williams’ publicist Mara Buxbaum told The Hollywood Reporter: “Robin Williams passed away this morning. He has been battling severe depression of late. This is a tragic and sudden loss. The family respectfully asks for their privacy as they grieve during this very difficult time.”

His wife Susan Schneider said: “This morning, I lost my husband and my best friend, while the world lost one of its most beloved artists and beautiful human beings. I am utterly heartbroken. On behalf of Robin’s family, we are asking for privacy during our time of profound grief. As he is remembered, it is our hope the focus will not be on Robin’s death, but on the countless moments of joy and laughter he gave to millions.”