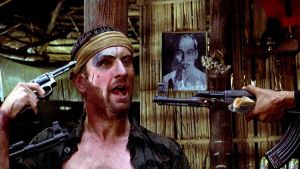 It’s 1967 and three Russian-Americans – sensible Mike (Robert De Niro), softie Steven (John Savage) and introverted Nick (Christopher Walken) – leave behind the steel mills of Pennsylvania for duties in Vietnam. There they are captured by the civilian-slaying Vietcong, who subject the triumvirate to such sadistic tortures as an underwater cage filled with rats. American know-how and a game of Russian roulette allow them to kill their captors and escape, though it becomes apparent that life will never return to normal.

There were walkouts when Michael Cimino’s impactful war drama premiered at the 1979 Berlin International Film Festival. At a time when Pinko Hollyweird was churning out explicitly anti-Vietnam war pictures (Coming Home, Hair), The Deer Hunter was staunchly conservative. The film’s flag-waving brand of Americana and depiction of the Vietcong as numbskull brutes proved particularly uncomfortable for festival delegates hailing from the Soviet Bloc.

That’s not to say that Cimino’s three-hour epic shies away from depicting the horrors of combat or Nick’s awful PTSD fate. There are many unforgettable moments, made all the more indelible by the cinematography of Vilmos Zsigmond (McCabe & Mrs Miller, Close Encounters of the Third Kind). Walken’s Oscar- winning performance is a thing of terrible beauty. And who could overlook that ominous drop of wine on the wedding dress, or the final bittersweet (though not quite satirical) rendition of God Bless America?

Meryl Streep signed on for her negligible role in order to be near her domestic partner, John Cazale, who was dying from lung cancer during the shoot; their chum De Niro personally covered Cazale’s astronomical insurance premium. The sublime Streep brings life (and dialogue) to a role where there was none before.

For all its dramatic clout, The Deer Hunter is a fiercely reactionary film defined by manly men, stay-at-home wifeys, and outdoor activities that Ted Nugent would approve of. Despite the late-1960s setting, the film harks back to the militarism of Eisenhower while heralding the incoming muscular Reagan years.

That hardly matters: The Deer Hunter, regardless of one’s political inclinations, is far too pungent to argue with. First-time viewers will suddenly make sense of thousands of pop culture references – and of a certain drinking game. We envy them their discovery.

A ‘really subversive idea’: Most people are pretty decent
10