A look at Wim Wenders’s documentary, Pope Francis: A Man of His Word. 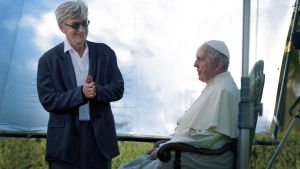 Film Title: Pope Francis: A Man of His Word

In centuries past, the likes of Velázquez and Raphael helped to burnish the images of popes. The most effective portraits established the Holy Father – lit by heavenly light – as a saint long before the canonisation process actually began.

The comparison with Wim Wenders’s eminently watchable study of Pope Francis is not entirely sound. Though aides around the pope suggested Wenders for the job, A Man of his Word is not quite an official commission. It is, nonetheless, as uncritical a study as the Vatican could have hoped for.

Certain uncomfortable subjects are conspicuous by their absence. Others are skirted over too quickly. If you are in any doubt as to the impetus behind the project then look to its title. No film called A Man of his Word is going to draw much blood from the subject.

All that noted, Pope Francis must take much of the credit for the largely positive impression. Gathered over six hours of interviews – using the so-called “Interrotron”, which allows the interviewee to speak directly to camera – his answers leave the impression that he cares sincerely about poverty, pollution and corruption. He engages. He has a sense of humour. He is as happy to reference Dostoevsky as the scriptures.

Raised as a Catholic, though now a practising Protestant, Wenders idealised Saint Francis of Assisi as a child and he makes much of the Pope’s decision to take that pious rebel’s name. Shooting in the style of Carl Theodor Dreyer, using a hand-cranked camera from the 1920s, the director breaks up the film with monochrome scenes from the saint’s life. The uncomfortable squabble between pastiche and experiment doesn’t entirely work – occasionally bordering on the comic – but it does offer relief from an often-claustrophobic format. Wenders also allows some footage from the pope’s early life. He includes moving shots of him talking to the disadvantaged and to the massed faithful (watch out for a brief glimpse of the hugely religious actor Jim Caviezel). Most of the picture is, however, taken up with conversations between the director and his engaged subject. It thus feels very different to earlier Wenders documentaries such as the joyful Buena Vista Social Club, the innovative Pina or the visually rich The Salt of the Earth. The set-up is closer to that of Errol Morris’s Fog of War: Eleven Lessons from the Life of Robert S. McNamara, but, whereas that director (the devisor of the Interrotron) talked the former US politician into chilling admissions, Wenders is never seen holding the pope to account.

The issue of clerical sexual abuse is raised and, audibly outraged, Pope Francis does say: “A priest who does this betrays the body of the Lord.” The director does not, however, push him further on the bureaucratic foot-dragging and continuing evasions. A subject that many will feel the most important facing the church is dismissed in a brief 10-minute aside.

There is no mention of abortion whatsoever. For Irish viewers, still catching breath after a frantic referendum campaign, this feels like making a documentary on Napoleon with no mention of Waterloo.

These absences are all the more annoying because, on this evidence, Pope Francis is quite capable of engaging with difficult questions (Wenders says no restrictions were placed on the topics for discussion). “Could anybody think that Gandhi or Martin Luther King are less loved by God?” he says smilingly of the Baptist and the Hindu. Atheists also get a word of support. Roman Catholics could have a lot worse. They have had a lot worse.

Oh and since you didn’t ask, Bono, an old chum of Wim, makes no appearance. How did that not happen?