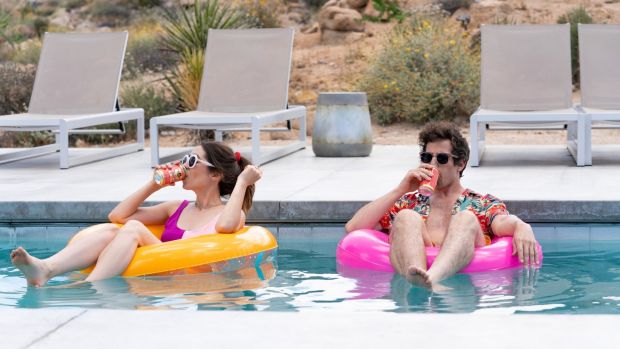 It is a little over a year since, trousering $17,500,000.69 from Hulu and Neon, Max Barbakow’s inventive comedy broke the record for the highest ever sale at the Sundance Film Festival. We’ve read that story before. That 69 cents pushed it past the ultimately doomed The Birth of a Nation from 2016. Just two months ago, Sian Heder’s CODA, now with Apple, broke the record again with $25 million. It’s like Groundhog Day.

No, it really is like Groundhog Day. Palm Springs begins with sarky Nyles (Andy Samberg) waking up beside his useless girlfriend in the eponymous, baking Californian city. Later, at their pals’ wedding, our hero hooks up with Sarah (Cristin Milioti), the bride’s sister, and they make for the desert. Just as they are about to seal the deal, a lunatic (the always welcome JK Simmons) appears from nowhere and shoots Nyles with an arrow.

He crawls towards a glowing light in a nearby cave, begging Sarah not to follow. She disobeys his entreaties and, with a clean edit, they both wake up in their respective beds at the beginning of the day that is supposed to have just ended.

Palm Springs, arriving here on Amazon Prime, is not the only entertainment to have revisited the seemingly unbreakable time loop. We got a bit of that in Doug Liman’s super Edge of Tomorrow. We got some more in the recent Netflix series Russian Doll. But few high-profile movies have sailed so closely to the coast mapped out by the Bill Murray classic.

Barbakow’s film is, essentially, a romantic comedy that invites a man to gain wisdom while winning over an initially suspicious woman. He experiments with suicide. He finds ways of exploiting his knowledge for sensual gain. In the opening half hour, more than a few viewers will find themselves asking: “Hang on? Are you allowed to do this? Isn’t there some law against such rigorous use of an existing template?”

Happily, the film is good enough to shake off those objections and to banish thoughts of earlier over-hyped Sundance record-breakers. The variations matter. Nyles begins the film already in the loop. It is the arrival of one more person into his temporal hell — we can safely bet that Simmons’s character is already there — that kicks off the core narrative.

This is a cooler, less emotionally fraught comedy than Groundhog Day. Nyles and Sarah, partners in torment, get to talk their way towards a potential escape or a possible accommodation with forever.

Most such narratives are working on an allegory for everyday life. The protagonist, like so many humans, is trapped in an endless cycle of familiar frustrations and apparently unbreakable miseries. Here Andy Siara’s script is also poking at the dynamics — or is “statics” a better word? — of the long-term (very long-term) relationship. Something needs to shift to keep the partners in hope.

None of which helps convey how much fun is to be had with Palm Springs. Shot in dehydrated colours by Quyen Tran, the film uses its desert setting to emphasise the surreal isolation of its increasingly desperate characters.

Samberg, star of deserved cult Hot Rod and the hit series Brooklyn Nine-Nine, has already established himself a master of the exasperated quip. “I am the antichrist. Just kidding, there is no God,” he says in mock explanation for his omniscience. Cristin Milioti, best known for How I Met Your Mother, resists temptations to showboat but still manages to make the best of a delicious opportunity.

We end up with a philosophical comedy that is not afraid to aim the odd joke below the belt or, as resolution looms, to give in to sentimentality. It’s a little bit Capra. It’s also a little bit Beckett.

“We kind of have no choice but to live,” Nyles says in the latter mode. “So I think your best bet is just to learn how to suffer existence.”

On Amazon Prime from April 9th