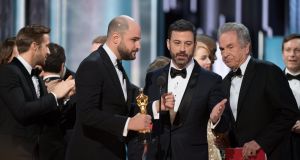 Oscars host Jimmy Kimmel (centre) explains a mix-up in the announcement of the winner of Best Film after the cast of La La Land was awarded the Oscar. Photograph: EPA 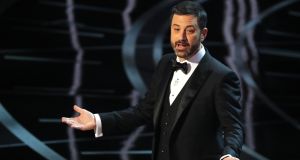 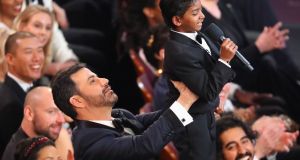 Television host Jimmy Kimmel skewered Donald Trump and the Academy’s record on diversity in his opening monologue for the Oscars, thanking the president and saying: “Remember last year when it seemed like the Oscars was racist?”

In a self-effacing and sarcasm-laden speech, Kimmel, who was hosting the ceremony for the first time, started by saying how he’d been told he needed to deliver a message of unity.

“This broadcast is being watched live by millions of Americans and around the world in more than 225 countries that now hate us,” he said.

“The country is divided right now. People have been telling me I need to say something to unite us. I’m not the man to unite this country,” he added, before delivering the only serious part of his monologue.

“There are millions and millions of people watching right now, and if every one of you took a minute to reach out to one person you disagree with and have a positive, considerate conversation - not as liberals or conservatives but as Americans - if we all did that it would make America great again. It starts with us.”

After his opening monologue, Kimmel continued to jab at Trump and his administration throughout the ceremony. He referred to Ben Carson, Trump’s pick as secretary of housing and urban development, as Doctor Strange; he referenced the president’s obsession with “fake news” and joked that it was nice to have a president who believes in the arts and sciences while introducing Cheryl Boone Isaacs, president of the Academy of Motion Picture Arts and Sciences.

Hey @realDonaldTrump u up?

Kimmel encouraged speeches that Trump “will tweet about in all caps during his 5am bowel movement tomorrow”.

The host also reignited his long-running fake feud with Matt Damon, which began with his exchanging of parody songs with the actor and Kimmel’s then girlfriend, Sarah Silverman, in the early noughties.

Kimmel mocked Damon’s decision to give the lead role in Kenneth Lonergan’s Oscar-nominated Manchester By The Sea to Casey Affleck.

“He gave that role to his childhood friend Casey Affleck. He handed what turned out to be an Oscar calibre role over to his friend and made a Chinese ponytail movie instead, and that movie, The Great Wall, went on to lose $80 million.”

Kimmel also dedicated a section to Meryl Streep, calling her over-rated and mimicking Mr Trump’s criticism after the actor used a speech at the SAG awards in January to address the president.

Kimmel introduced several gimmicks throughout the evening such as showering sweets from the rafters of the Dolby Theater, and also brought in unsuspecting tourists who’d been on a Hollywood bus tour.

The host recently suggested he was considering stepping back from his long running late-night show on ABC. He told Variety that he was definitely carrying on for the next three years but after that would consider doing something else.

“I want to go out on my own terms. If I ever feel like we’re repeating ourselves, I think it’s a good indication that it’s time.”

Are we ready for Martin McDonagh’s satirical look at sectarian violence?
10

Life after a life sentence: I’m 39 and scared of everyone
Real news has value SUBSCRIBE