O’Shea Jackson Jr: a chip off the old Cube 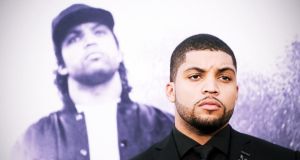 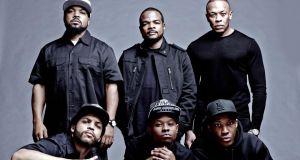 The music-themed biopic has thrown some unlovely, unwanted shapes over the years. Often the viewer is left thinking “Sure, that guy looks like Paul McCartney, but when he opens his mouth he sounds as though he hails from somewhere between Manchester and the planet Mars”. Or “Wow, Kurt Russell does a mean Elvis impersonation, but when’s he going to put on an eye-patch and escape from New York?”

With a whopping American gross of $111,284,275 after just two weeks (the cost of an evening on the tiles for former NWA member Dr Dre, but the highest ever take for a music biopic), it’s fair to say that the NWA film Straight Outta Compton is doing something right where others have stumbled.

The film is now enjoying a third week at the top of the US box office, towering over such tent-pole releases as Mission: Impossible – Rogue Nation, Ant-Man and Hitman: Agent 47. There is talk of a sequel.

Maybe it’s because the NWA story has such a dramatic scope, taking in the origins of gangster rap, police brutality, HIV, the Rodney King riots and East Coast/West Coast rivalries. Maybe, as with everything NWA ever did, the film has a swagger that most superheroes, let alone regular old movie protagonists, can’t touch. And maybe, just maybe, it’s because the casting director deserves an Academy Award.

There is, however, one performance that viewers can’t stop talking about. Ice Cube, or O’Shea Jackson as it says on his birth certificate, is essayed with no little flair by his 24-year-old son, O’Shea Jackson Jr.

It’s not just that junior nails it. He also looks spookily like his dad: a real chip off the old Cube. As Cube Sr has put it: “It’s a role he was born to play.”

“That’s just how the universe works. It’s not like Straight Outta Compton was created specifically for me to play him. Universal Studios aren’t just going to okay nepotism.”

Happily, even though Ice Cube is a producer, nepotism was never on the cards. Dad, whom Jackson describes as a “super-reasonable” parent, was keen that his son would audition just like everybody else. Hence, the USC graduate faced two years of training with acting coaches, among them Aaron Speiser, who works with Will Smith and Gerard Butler, and Susan Batson, who works with Nicole Kidman.

He and the rest of the cast - including Corey Hawkins (Dr Dre), Jason Mitchell (Eazy-E), Aldis Hodge (MC Ren) and Neil Brown Jr (DJ Yella) – even went into a studio to re-record NWA’s debut album.

“I wanted to train,” says Jackson. “I needed experience. I needed to develop confidence in myself. So busting my ass for two years was hard. But it was a blessing. I never felt like I was a shoo-in. I never felt like the role was mine until after the final chemistry test with two other Cubes in the room.”

Jackson is bright, articulate and quick to laugh; one wonders how Cube and director F Gary Gray managed to stand firm on the matter for so long. One might equally wonder how a show business kid could be so lacking in airs and graces.

“The guy with the Irish name gets interviewed by an Irish newspaper,” laughs O’Shea. “That’s awesome.”

Does he know where the name came from?

“I looked it up once. It said it means ‘son of Shea’. Well, that’s kind of . . . broad. I’ll have to set up a Facebook group or something. Dad was the first O’Shea in the family. I don’t know where it comes from. But I know it was between O’Shea or Orenthal. So thank God I’m an O’Shea.”

Long before the movie, the name “O’Shea Jackson Jr” gifted the Compton-born youngster some pretty big shoes to fill.

“Always,” he says. “My name is unbelievably heavy. As a son, you want to make your own name. You want to step out of your father’s shadow. But I don’t look on Straight Outta Compton that way. I look on it as something that brought dad and me closer together. He and I were already close, but the film was an experience that not a lot of sons get to have with their fathers.

“We may work together again on a film. Our paths will cross, for sure. But we’ll never get to work on something like this, that’s about our life and our family the way Straight Outta Compton is.”

Facts of the father

As Ice Cube, Jackson rages against unscrupulous business practices and police brutality. I wonder if the screenplay included details that he wasn’t familiar with? Did anything surprise him?

“Well, my father plans out everything,” he laughs. “And he’d kill me if I didn’t do the same. So to find out that when he left the group he didn’t have a plan . . . that surprised me. He didn’t know if the solo career would work. He was prepared to get a nine-to-five job. For him to be on top of the world with his friends and to come back down to the bottom just because the situation wasn’t right?

“That speaks to his integrity. It’s way more integrity than most 18- or 19-year-olds would display.”

In common with his father, O’Shea Jr has dabbled in the music industry, trading under the name OMG. In 2010, he and his brother Darryl featured on the songs She Couldn’t Make It on Her Own and Y’all Know How I Am, on Ice Cube’s I Am the West album. In March 2012, OMG released a well-regarded mixtape, Jackin’ for Beats, online.

“The same advice he has given all of us – all of his children – our whole lives. Have confidence in what you’re doing. Be true to yourself. Don’t let nothing change you. As soon as you stop being true to yourself, it’ll show in your work.”

For the moment, Jackson’s career as OMG is on hold. Having specialised in screenwriting at the USC School of Cinematic Arts (Wes Anderson is his favourite director and The Big Lebowski is his favourite film of all time), he is cheerfully waiting for “flak from the other screenwriters when they see me on the wrong side of the camera”.

Still, Jackson not about to let his big-screen break slip away.

“Cinema is my first love,” he says. “We put so much work into getting it right this time that I refuse to have Straight Outta Compton as my only screen credit. I’m planning on a long career in cinema. The best analogy I can make is that I don’t want to be Luke Skywalker – I want to be Han Solo.”

Dermot Kennedy: ‘I won’t let anyone take advantage of me or my music’
4

‘He’s so strapping and virile’: Patrick Stewart at 80, by Shatner, McKellen, Grammer and more
10