No Limbs, No Limits

No Limbs No Limits - trailer 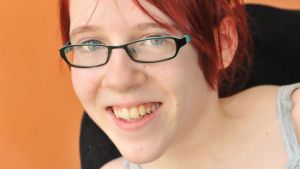 Film Title: No Limbs No Limit

Young Joanne O’Riordan is already something of a national hero. Born with Tetra-amelia syndrome, an extremely rare condition characterised by the absence of all four limbs, the Cork teenager famously pressed Enda Kenny into declaring that, if elected in 2011, he would not cut disability funding. She went on to charm viewers of The Late Late Show and address an audience at the United Nations.

Steven O’Riordan has been filming his sister throughout her life and, with the help of the Irish Film Board, Rehab Group and Vodafone Ireland Foundation, has assembled a useful, funny, often moving record of Joanne’s struggles and triumphs. The film begins with that visit to the UN and then allows Joanne’s mother and father to discuss the subject’s birth.

It’s a troubling story. Mrs O’Riordan explains how one medical professional compared their daughter to an unwanted doll. Their anger fuelled a desire to ensure that Joanne would live as normal a life as possible.

Mind you, if the film is any guide, the endlessly charming Ms O’Riordan is not the sort of person to accept anything less. The film is restrained in its treatment of everyday logistics, but her adept manipulation with an iPhone is something to behold.

Produced on a limited budget, No Limbs, No Limits breaks no new ground in the field of documentary cinema. But its sincerity and honesty cannot be questioned. Kudos to all involved in securing it space in commercial cinemas.