Mute: A Berlin-set Bowie tribute that says nothing at all 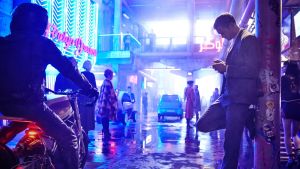 You can barely focus on Duncan Jones’s fourth feature for the mists of goodwill floating about the thing. Following the disaster that was Warcraft, the director of Moon and Source Code, two science-fiction wonders, has returned to the genre that made his name.

There is more to massage our sympathies. Set in the same universe as Moon – and featuring a brief cameo from that film’s Sam Rockwell – the film stands as a tribute to Jones’s late father, David Bowie.

We go about a scuzzed-up, futuristic Berlin. It features snippets of Philip Glass’s Heroes symphony. How could you not adore it?

It should be clear where this is going. Produced by and released exclusively here on Netflix, Mute is not an outright catastrophe like Warcraft. There are some agreeably eccentric performances. Love has been lavished on every corner. But, for a film with such a long gestation period, the story feels weirdly threadbare. The art design is third-hand. The pop-cultural references make no great sense. Goodwill isn’t enough.

A towering, under-directed Alexander Skarsgård plays a mute bartender named Leo – raised Amish for no other reason than it offers an excuse for his never having surgery to restore his voice. In the film’s present, he works in a familiar type of movie bar – Ye Olde Dystopia Taverne, perhaps – peopled by blue dancers and men in black shirts. When Leo’s girlfriend goes missing, his researches bring him deep into a sketchily drawn underworld.

The plot doesn’t much matter (or indeed exist). Mute is all about its look, its nods and its broadly drawn characters. You sense that Paul Rudd and Justin Theroux are trying very, very hard – so hard muscles swell in their necks – as two rogue surgeons modelled randomly on Elliott Gould and Donald Sutherland in M*A*S*H.

Rudd has Gould’s extravagant moustache. We eventually learn that “Duck”, the Theroux character’s nickname, derives from his given name Donald (I sympathise, believe me). There is no reason for this reference. It just is.

There is equally little reason to stage a car chase – stationary car follows flying vehicle – that communicates awareness, but little understanding, of the most famous sequence in The French Connection.

The film’s most conspicuous debt is, however, to Blade Runner. There comes a point when aping the grubby streets, flashy advertising and seedy retail outlets of Scott’s film ceases to work as tribute and looks like mere cliche. That point passed at least two decades ago.

None of this would matter much if Jones had streamlined his shaggy, rootless narrative. Being charitable, we could see it as a celebration of the post-second World War Berlin – US deserters and lucrative shambles – celebrated in Billy Wilder’s A Foreign Affair and Thomas Pynchon’s Gravity’s Rainbow. Will you buy that?

Oh, well. Since we’re being encouraged to use the Bowie scale, we will admit that Mute is no Never Let Me Down. Let’s charitably rate it at Black Tie, White Noise level and leave it at that. A shame.