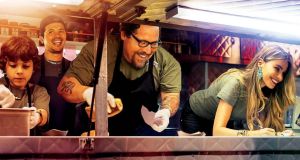 THE MOVIE
Jon Favreau writes, directs and stars in Chef, playing the frustrated Carl, who breaks out of the shackles of fine dining to go on the road in a food truck. Peppered with cameos from Dustin Hoffman, Sofía Vergara, Oliver Platt, John Leguizamo and Scarlett Johannssen, this story is one of food, friendship and family ties.

THE SCENE
Reacting badly to a poor review by a famous critic and blogger (Oliver Platt), Casper fires off an angry tweet followed by a public artistic tantrum. After the meltdown goes viral (because, duh, someone filmed it on their phone), his ex-wife (Vergara) invites him home to Miami to reconnect with his young son Percy (Emjay Anthony). While there, Casper also rediscovers Cubanos, the Cuban street food version of a toasted ham and cheese sambo. He buys an old food truck, dusts it off and hits the road with cook Martin (John Leguizamo) and Percy in tow, cooking Cubanos to crowds all over the country and whipping up a social media storm as they go along.

THE FOOD
Food trucks have gone a long way to improve the perception of American food at home and abroad, and a film featuring food trucks wouldn’t be forgiven if it didn’t make a big deal out of the food. Chef gets its street cred from food consultant Roy Choi, owner of Korean taco food truck Kogi. One of the founders of the food truck movement, it’s Choi’s pioneering Korean BBQ fast food which made its debut out of the side of a truck on Sunset Boulevard in 2008 that we’re paying homage to today.

METHOD
In a small bowl, mix together the soy sauce, rice wine vinegar, sesame oil and brown sugar until well combined. Set aside.

Heat a drizzle of olive oil in a large, heavy bottomed pot and brown the meat in batches. Remove with a slotted spoon and set aside, draining any excess liquid from the pot.

Now add another drizzle of olive oil to the pot and fry the the onions over a medium to high heat for three minutes before adding the grated garlic, grated ginger and chilli flakes. Stir and fry for one minute. Return the beef to the pot and pour over the sweet soy sauce mixture. Top up with a little water so that the beef is just covered. Bring to a simmer, cover with a lid and cook for three hours. The beef will be really tender so use a fork or a wooden spoon to pull it all apart.

For the pickle, cover the cucumber with the rice wine vinegar, sugar and chilli, leaving in the fridge for one to two hours before serving. Any longer and it’ll lose its crunch.

For the BBQ sauce, mix together the thick Gochujang sauce, sugar, soy sauce, rice wine vinegar and sesame oil and set aside.

To serve, grill your flour tortillas for 45 seconds on each side before removing to a serving plate. Pile on the beef and top with the BBQ sauce, pickle, toasted sesame seeds, fresh coriander and serve with a slice of lime.