Mile 22: Mark Wahlberg in an underwhelming glob of generic pulp

Review: The fight scenes are bruising and jaw-rattling. The rest of the film in rubbish 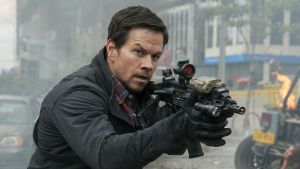 When I came to look at my scrawled notes for the latest collaboration between Mark Wahlberg and director Peter Berg – following serviceable shared action in Lone Survivor and Deepwater Horizon – I was disconcerted to read the words: “Stop monologuing, you bipolar f**k!”

Wahlberg does indeed play an agent with a bipolar condition. Yes, he does spill out the sort of gibberish that you’d expect from a pound-shop David Mamet after suffering a head injury. But, surely, I wouldn’t be so insensitive even when speaking only to myself.

On reflection, I realised that this is an actual snippet of dialogue from John Malkovich. Keeping a brave face, despite acting beneath a wig that would shame a divorced slots junkie in Reno, Malko is serviced with monitoring Wahlberg as he escorts a dangerous prisoner (Iko Uwais) across the perilous streets of an unnamed Asian city.

That’s not a terrible idea for a film, and Mile 22 does profit from some excellent action sequences. Uwais, an acclaimed Indonesian action star, remains best known in these territories for Gareth Evans’s The Raid, and his bruising, jaw-rattling battles juice up what is otherwise an underwhelming glob of generic pulp. Those sequences are crudely bolted on. They come from nowhere much and lead to nowhere worth going. But we’re better with them than without them.

The rest of the film is rubbish. Wahlberg’s character could hardly be more grating if he were delivering each line through a faulty loudhailer. Constantly snapping a rubber band on his wrist (a “bipolar” thing, apparently), he swaggers like a spoilt infant on his fourth trip to Disneyland.

All of this might be bearable if it weren’t for the exhaustingly rapid cutting. You expect that from the action sequences, but even the quietest conversation is composed of chunks easiest measured in picoseconds.

It’s like reading Tom Clancy by strobe light. If that’s your bag.