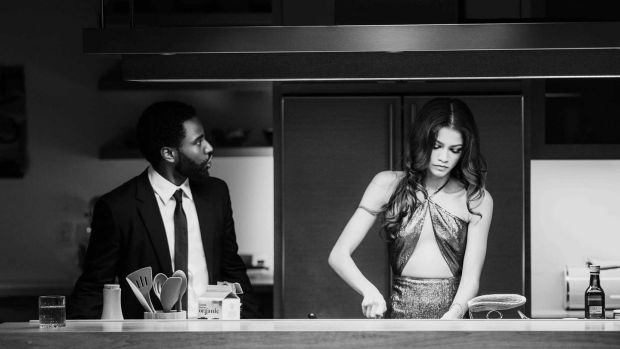 Euphoria creator Sam Levinson throws his hat in the Oscars ring with this slinky, maddening, romantic, scathing two-hander in which a hot-shot director, returning from the successful premiere of his debut feature, argues with his domestic partner.

As rows go, Malcolm & Marie offers an epic spectacle, redolent of Elizabeth Taylor and Richard Burton’s onscreen bust-up in Who’s Afraid of Virginia Woolf?. For every moment of calm between the storms, there’s another deeper level of what-the-fight-is-really-about.

Inspired by an incident in which writer-director Levinson neglected to thank his wife at the premiere of his 2017 debut feature Assassination Nation, Malcolm & Marie begins as an elated director paces around a palatial, glassy house in a flurry of woo-hoos and self-congratulation.

James Brown’s Down and Out in New York City plays, adding to his swagger: “The white guy from IndieWire loved it,” he brags. “I wrote and directed a movie that knocked the audience the f**k out tonight,” he booms. Later, he almost bemoans favourable comparisons to Spike Lee and Barry Jenkins. What about William Wyler or Elaine May?

With all that strutting, he fails to notice that his girlfriend Marie is so angry, she can hardly pee. But why? Over 106 minutes, she gives him both barrels. He plundered material for his film from her struggle with addiction, he cast another actor in the role, and – the inciting incident – he failed to thank her in his speech.

He counters. She’s out to ruin his big night, she’s self-destructive, and she is “by far, the most excruciating, difficult, stubbornly obnoxious woman I met in my entire life”. Between bouts there’s music, making-up, and mac and cheese, prepared in hasty, waspy motions by Marie and wolfed down by Malcolm.

Both players are terrific, but it’s Zendaya who leaves the viewer yearning to watch the Spider-Man star in a silent movie. The camera loves her and she responds in kind, with deft facial motions and luminous star wattage.

The script is as indulgent as it is compelling, which is fair considering its depiction of two riled people who know each other’s weaknesses. Marcell Rév’s crystalline high-contrast black and white cinematography is gorgeous enough to transform a domestic dispute into something wonderfullycinematic.

Malcolm & Marie is on Netflix from February 5th

Why I was drawn to Wuthering Heights by Emily Brontë

Sinéad O’Connor on her teenage years: ‘I steal everything. I’m not a nice person. I’m trouble’