Make Us Dream: Another stellar display by Steven Gerrard

Review: A powerful documentary from the team behind ‘Senna’ and ‘Amy’ 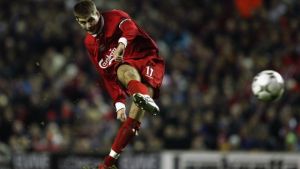 Steven Gerrard: a man out of step with the mercenary, opportunistic world of contemporary football? Photograph: Clive Brunskill/Getty Images

Full disclosure: this Liverpool FC-related review will be written by a Liverpool supporter. As it happens a non-supporter might well respond positively to this exemplarily assembled documentary from director Sam Blair and producer James Gay-Rees. Taking the same approach as Gay-Rees’s earlier credits, Senna and Amy, Make Us Dream largely draws on archival footage with unfussy recollections from Gerrard, his parents and assorted colleagues and commentators. By letting the football do most of the talking, Make Us Dream gets properly stuck into the recent history of the sport. It’s almost as if they’ve called the man himself off the bench.

The most ardent Liverpool haters will find plenty of entertainment in the film’s larger engagement with the Premier League. Watch the strange evolution of the top flight as a deft montage recounts Ken Bates’s acquisition of Chelsea for a pound in 1982, Tony Blair heading balls with Kevin Keegan, the rise of the agent and José Mourinho’s first British press conference. Golly, does he look a whole lot less frazzled than he does now.

In terms of pageantry there’s a dramatic shift from the 2001 PFA Player of the Year Awards – think Castlebar Song Contest – and the pyrotechnics of the 21st century.

For more engaged viewers and interested parties, this can be as impactful as Shakespearean tragedy. His parents recount the younger Gerrard asking what happened his cousin, Jon-Paul Gilhooley, the youngest victim at Hillsborough.. There’s the first goal at Anfield, the extraordinary sequence of matches in the 2004-2005 season culminating in the “miracle of Istanbul” and the constant injuries of his final year at the club.

At the heart of the film Gerrard makes for articulate company. He’s heartbroken early and often. He is devastated when Michael Owen leaves (“I just assumed we were going all the way together,” he says) and again when Fernando Torres departs. He is alarmingly frank about his fraught relationship with Rafael Benítez.

There’s a suggestion in Make Us Dream that he was a man out of step with the mercenary, opportunistic world of contemporary football. But the loyalty and steeliness that carried him through the worst of times, including the Tom Hicks and George Gillett administration, is as remarkable and defining as anything he did on the pitch.