Magic Mike XXL review: stripped of all worth 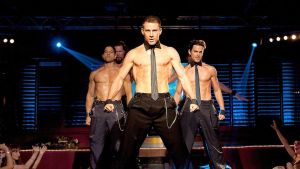 Grease 2. Speed 2: Cruise Control. Caddyshack 2. Scooch over, unworthy sequels: and make room for the jaw-dropping catastrophe that is Magic Mike XXL. Fans of the 2012 original will recall that Steven Soderbergh deftly sidestepped ideological quibbles by exploring the dark underbelly of the male stripping business, with warmth and humour and a brand of social realism emanating from somewhere between John Cassavetes and Saturday Night Fever.

Magic Mike XXL has no underbelly: only spray-tanned abs. The “film” sees Channing Tatum and crew head off toward a stripping convention and, erm, well, that’s the entire plot.

There follows a great deal of aspirational banter, mostly with the word “custom” attached. One lad wants to set up a custom paint business, another wants to sell custom frozen yoghurt, the titular Mike (Tatum) already has a custom furniture business. So many business plans: around 40 minutes in, I felt like I’d been transferred to a small loans desk in Hades.

Sadly, these turn out to be the best bits of the film. Scriptless, pointless and utterly worthless, Magic Mike XXL simply refuses to behave like a movie. Crushingly dull scenes are defined only by outbursts of bro-speak (“one last fucking ride” and “taking this old school” appear at least a million times) and the kind of directionless acting not seen anywhere this side of Victoria Wood’s Acorn Antiques. Various players miss cues, swing their arms for want of something better to do and stare off into space.

We know just how they feel: we have nearly two-hours of this to contend with.

It gets worse. A stopover at a house populated by ageing southern belles (led by Andie McDowell) ranks among the most excruciating and patronising depictions of 40-something women ever committed to celluloid. Cougarishly, they purr and prowl and bitch about their husbands.

At least that sequence is visible. Elsewhere an exchange between Mike and a flirtatious photographer (Amber Heard) is so poorly lit and technically unstable, I wasn’t sure if there were people onscreen.

A hundred lines for everyone involved: two strip sequences do not a movie make.