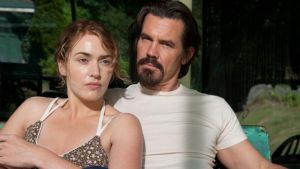 It takes a special kind of idiot to look at any piece of art and ask: But what’s the point of it? It’s tempting, therefore, to dismiss the completely pointless Labor Day as the kind of picture that makes idiots of us all. To do so, however, would be to accord the film far more heft than it actually ever musters.

How could this be? Jason Reitman’s adaptation of Joyce Maynard’s novel (released here without a “u”, pedants) wears a plausible veneer of quality and respectability. There are proper thesps attached; and the director of Juno, Young Adult and Up in the Air is no slouch. And yet Labor Day hits our screens – following a suspicious number of delays – to no discernible effect.

Scrape at the nullity and there’s a dull coming-of-age tale, in which a 13-year-old Henry (Gattlin Griffith) and his depressed, divorced mom Adele (Kate Winslet) are held hostage by escaped convict Frank (Josh Brolin). Taking up temporary residence with the single-parent family, Frank fixes creaky hinges, waxes the floor, counts the logs, changes the boiler, services the lady of the house, and makes a meaningful peach pie.

What? Is there a special Stockholm Syndrome Dating Agency for this? Why haven’t we been told before now?

A police hunt, characterised by considerably less jeopardy than one finds in the Moshi Monsters movie, gets underway. Mostly, we’re forced to spend time with an insipid bildungsroman padded out by a drippy romantic subplot and wondering, if only?

If only Kate Winslet hadn’t pulled out all the stops in her 100-year campaign to win an Academy Award (she finally lifted the gong, in traditional Oscar style, for her weakest screen performance in The Reader) then her acting armoury wouldn’t seem so overly familiar. Here comes the wobbly Winslet lip. Here comes the miscarriage.

And if only we could believe a single solitary thing in this movie. The story is ludicrous. The reveals are unintentionally hilarious and clumsily delivered. Even the production design is off. If this is 1987, then why does it look and feel like 1957?