‘This isn’t a goof’: Actor and director talks Mid90s and the power of writing 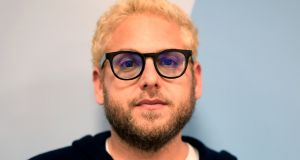 Who knows where the time goes? It’s been close to a decade since I last met Jonah Hill. In 2010, he and Russell Brand – then still a plausible film star – visited Dublin for promotional duties on Get Him to the Greek.

“I am sorry for how I was back then!” he says with a chesty cackle. “I often look back on my youth and think I was way too young to be representing myself and my life.”

No apology required. He was perfectly agreeable. But his comments do get at the weirdness of this business. Then in his early twenties, he had to go before the press and present some picture of the whole man. Not fair.

“And they all want you to be something,” he says. “You have to pretend to know who you are, but you don’t. Everyone’s full of shit, basically.”

At that point Hill, as an actor, had cornered the market in the angry nerd who offers anguished counterpoint to smoother leading men. He bossed Superbad in 2007. He was amusingly stoned in Strange Wilderness in 2008. It looked as if he would tick along in Judd Apatow’s informal troupe for years to come. That happened. But he also stretched out into less comic roles and attracted the attention of Oscar voters. He was twice nominated as best supporting actor: for Moneyball in 2011 and Wolf of Wall Street in 2013.


Now, he’s gone and directed a fine film. Mid90s stars young Sonny Suljic as a teenage skateboarder in Los Angeles during the Clinton years. He falls in with a rough crowd. He gains useful experience. He gains some understanding of his troubled older brother (played by reliably excellent Lucas Hedges).

We tend to assume such things are autobiographical. But I’m looking at Jonah’s background and he seems to have lived a more comfortable life than that of his protagonist. Mom was a costume designer. Dad was an accountant for Guns N’ Roses (really). His younger sister, Beanie Feldstein, is currently receiving raves for Olivia Wilde’s Booksmart.

The title was no accident. Hill was keen to root the film in a particular era. He remembers that, 25 years ago, kids were, in his world, less able to talk about their troubles. There was more evasion, more suppression, more sublimation. The coming generation have got better at that. Right?

“In LA and New York it’s now far more liberal and progressive,” he says. “My nephews are 12 and nine and they are more encouraged to be emotionally expressive than I was. Just talking about your emotions doesn’t have that stigma for them – though I am not sure that’s the same in the rest of the world. When I was growing up, you were taught it’s not masculine to express your emotions.”

Hill grew up in the well-heeled west LA suburb of Cheviot Hills. He did indeed work at a skateboard shop as a kid before moving on to Bard College in New York State and the University of Colorado. But Bohemia beckoned and he made for downtown New York. When I ask him about his ambitions at this time, he doesn’t pause.

“Oh I wanted to be a filmmaker,” he says.

So that was always the primary aim?

“When I was a little, little kid I wanted to write for The Simpsons,” he laughs. “I wanted to write what Homer says. Then quickly I began to learn what a director was. Within skateboarding I learnt who Spike Jonze was and learnt he was interested in skate videos. Music videos were important to my generation. All these great auteurs started in that world. You then get into films and you realise there is this voice behind all that work you love. That is still what makes my life interesting, I am lucky that I have something that makes me so fulfilled.”

I dropped out of school. I freaked out. Hey, I freak out today about what I am going to do

He wrote and produced a few plays and developed something like a tiny cult following. The legend goes that a friendship with Dustin Hoffman’s kids opened the door to an audition for David O Russell’s I Heart Huckabees. He got the part. Then nothing much happened for a while. Look closely and you’ll spot him flitting by in The 40-Year-Old Virgin. He was briefly alongside Adam Sandler in Click. But it looks as if he endured some lean years.

“Not really, because it was only two years later that I got my first writing gig,” he says. “And I think writing is the most powerful field in our business – even if writers are often treated very badly. Ha ha! Everyone needs writing. If everyone took all this away they couldn’t stop me from writing a book. Of course there was some fear and anxiety. I dropped out of school. I freaked out. Hey, I freak out today about what I am going to do.”

I’ve talked to stars 30 years older than Jonah who still worry about it all being taken away from them. It seems an unavoidable symptom of being in the acting lark. That insecurity never quite goes away.

“No, I don’t think so,” he says. “Same for us all. Maybe you think: is the newspaper going to switch owners tomorrow? We all want certainty and none of us gets that. We don’t get that in life.”

Given Hill’s background and early ambitions, it is surprising that it took him so long to get round to directing. There has barely been a blip in his a career over the last decade. 21 Jump Street was funny and a smash. The Wolf of Wall Street was a critical and commercial behemoth. He attracted some nosy chatter about dramatic swings in weight, but he has remained a bankable asset throughout. Less famous actors than Jonah Hill have got to direct films at an earlier stage in their careers.

“I respect the role of filmmaker too much,” he says. “All I wanted to be was a director. To me it’s so easy to say: ‘Yeah, okay. I’ll direct.’ Everyone then says: ‘Yeah. That’s fine. That actor wants to direct. Just let him do it.’ And the film ends up looking like that’s exactly what happened. Ha ha! That’s the last thing I wanted. I wanted to be comfortable saying ‘That was my first film’ for the rest of my life. This isn’t a goof. It’s something I care deeply about. This is something I can stand by.”

If I go anywhere near ‘Why do people think this?’ that’s a recipe for feeling bad

The film has done very well for him so far. It premiered at the Toronto International Film Festival in September and has been released by the awards-friendly independent studio A24. Mid90s has an impressively loose rhythm that admits no obvious influences. It has little sport with sentimentality.

“When we premiered at Toronto I felt freaked out, totally naked,” he says. “People say: ‘You’ve been making movies a long time.’ There is no correlation at all with being an actor. There is no comparison.”

It has been an interesting 10 years. The release of Mid90s has changed things. He tells me that he is going straight into his next project as director. But I wonder if those Oscar nominations mattered more. The Academy still counts.

“I think for most people it would matter,” he says. “But for me, not so much. I think people just felt: he’s a comedy actor and he’s done something else. Some of my peers respected the performances and that maybe got me different acting roles. But I don’t think the media thought differently about me.”

That’s interesting. He mentions “something else” there. I wonder if it bothers him that straight roles get more respect than comic performances. That doesn’t seem right.

“No. I honestly would be a miserable person if I sat around thinking about things like that,” he laughs. “If I go anywhere near ‘Why do people think this?’ that’s a recipe for feeling bad.”