John Pilger on breaking the Great Silence of Australia’s past

In his revealing new documentary ‘Utopia’, distinguished journalist John Pilger paints a bleak picture of life for the aboriginal people of his native Australia 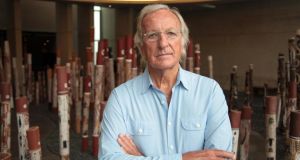 One suspects that John Pilger would greatly resent being thought of as any sort of fleshy institution, but the Australian journalist and documentarian has been irritating those worth irritating – imperialists, tin-pot tyrants, robber barons – for more than half a century. When Auberon Waugh turned his surname into a verb he was not offering any sort of compliment (the late fogey used it as a synonym for sensationalist hectoring). But such lexicographic elevation does set a writer aside from the following pack. After all, nobody much uses “Hitchens” or “Chomsky” as a verb.

Throughout his distinguished career, Pilger, now 74, has shown great interest in the staggering injustices meted out to the indigenous populations of Australia. In 1985, he directed a documentary entitled The Secret Country: The First Australians Fight Back. Four years later, he addressed the subject in his book A Secret Country.

His latest film, Utopia, has little good news about the current status of the original Australians. Those people are still disproportionately poor and politically disenfranchised. Politicians continue to patronise them.

“A small so-called indigenous middle class has emerged, many of whom have been co-opted by white authority; some fill the role of telling governments what they want to hear,” he explains. “On the positive side, Aboriginal medical services have improved – and yet their dedicated people can do little about the conditions that cause deprivation and disease in communities.”

Utopia (whose ironic title derives from a town in the Northern Territories), features revealing interviews with activists, politicians and passing members of the public. It also includes some chilling archival footage. An early documentary suggests that some light-skinned Aborigines could “pass as Australians”. How was it ever possible to think like that?

“It’s pretty primitive thinking when you consider that the only true Australians are Aboriginal. The rest of us are immigrants,” he agrees.

Pilger grew up, one assumes, among white immigrants who thought similarly. In his autobiography, Australian critic Robert Hughes – an exact contemporary of Pilger – describes a community that still looked towards Britain for its culture and standards. The indigenous people did not figure in conversations about the character of Australia. Did Pilger have any notion about the bigotry, disenfranchisement and land grabs?

“Like most Australians, I had no idea of the scale of mistreatment,” he says. “I used to go as a boy to LaPerouse beach on Botany Bay and sit on the sandhills and watch the sad-eyed children dressed in sacking in the Aboriginal reserve. I was told they were ‘dying off’. That was the prevailing wisdom, as if a certain Darwinism was taking its course. It was nonsense, of course.”

We are often told that all this has changed. The story goes that Australia has turned itself to face Asia. It has shaken off colonial shackles. Does he not buy the argument that it is now a more egalitarian country?

“Who for?” he replies. “These days Australia has one of the widest gaps between the economic top and bottom of any developed society. Many first Australians live in a poverty not very different from that in Africa and Asia.”

Raised in Bondi, Pilger started a newspaper at Sydney High School when he was just 12 years old. He still speaks warmly of delivering newspapers and gaining an attachment to that now-troubled medium. While still a teenager, he became a copy boy with the Sydney Sun and soon secured work writing for that city’s Sunday Telegraph. After a spell in Italy, he finally ended up in London.

Australia seems to have been the victim of a particularly ruthless brain drain in those years. Robert Hughes, Clive James, Barry Humphries and Germaine Greer all drifted towards England during the 1960s. There are no reports of the British establishment quivering in fear. But an Antipodean flavour was spreading about the worlds of academia, comedy and journalism. What on earth was going on?

“I’ve read that Clive James felt intellectually deprived,” Pilger says. “I actually loved my life in Australia and simply joined the great moving belt of my generation setting out on an adventure; we had a sense of living faraway from most of the planet. I was 22. I was also aware that Fleet Street was the ‘mecca’ of newspapers and I wanted to try my luck.”

Largely staying away from the expatriate community, Pilger seems to have found his feet impressively quickly. After a spell with
Reuters, he moved on the to the Daily Mirror, working first as a sub-editor, before rising to become the paper’s chief foreign correspondent. That paper was then a very different beast to the entity it became after Robert Maxwell took over as proprietor in 1984. As Pilger explains, it became the world’s “first ‘serious’ tabloid”. The paper retained a sense of mischief, but it also managed to address all the great stories of the age. Pilger found himself covering wars in Vietnam, Cambodia, Bangladesh and Biafra.

These experiences only hardened his political radicalism. The Vietnam War, in particular, seemed to pull together certain unhappy truths about post-war US foreign policy.

“I had grown up with the propaganda of John Wayne’s Hollywood, and reporting the invasion of Vietnam certainly helped me form a realistic view of the United States as a very powerful and often rapacious force,” he says. “I think many of the conscripted GIs over there had a similar understanding, if not a revelation. For many covered in the layers of state patriotism the reality of how their government actually behaved came as a shock.”

Vietnam is often identified as a turning point for the way wars are covered. Reporters found themselves dispatching combat footage that screened within days on national television. Many analysts suggest that the military, eager not to allow another generation to be politicised, were careful to exert much greater control over “embedded” journalists in the Iraq and Afghanistan wars. Pilger sees the Vietnam conflict in slightly different terms.

“You could go to the ‘front’ and see the war for yourself,” he says. “But it’s surprising how few journalists did this. The American general in charge of press liaison told me after the war that it was extraordinary how many media people came to him seeking guidelines. They wanted to be ‘embedded’.”

For people of this writer’s generation, Pilger is best remembered for a searing array of documentaries in the early 1970s. This was the time of fearless strands such as Granada’s World in Action (described by Mrs Thatcher as “a lot of Trotskyists”). Pilger’s first film for that series, The Quiet Mutiny, argued that the US Army in Vietnam was falling apart. He admits that he often had trouble getting his films on air, but none of them ended up on the shelf. As the years progressed, Pilger did manage to antagonise significant parts of the commentariat. A recently unearthed recording finds him squaring up to a young, already supremely confident Martin Amis. Late in his life, after praising much of Pilger’s early work, Christopher Hitchens remarked: “There is a word that gets overused and can be misused – namely, anti-American – and it has to be used about him.”

I dare say Pilger is big enough to absorb such assaults.

“It’s similar to ‘anti-German’ that was bandied about in the Germany of the 1930s,” he says. “American-ism is an ideology, and you can make up your own mind if you find it appealing. I don’t, and neither do a great many Americans. The term ‘anti-American’ – which you don’t hear much since the Bush era – is usually deployed by those who take a position very different from yours but lack evidence to make a coherent argument.”

At any rate, Pilger did not go away. He stuck to his tasks with pugnacious zeal and has become a hero and model to younger generations of political writers. Harold Pinter (not easily pleased) remarked: “John Pilger is fearless. He unearths, with steely attention to facts, the filthy truth, and tells it as it is.”

His tenaciousness as regards Australia’s indigenous people is characteristic of his approach. Over 50 years, he has come back to the topic again and again. There is not a great deal of hope in Utopia. What remains most shocking is the apparent lack of interest displayed by the white populations towards the first Australians.

“Many more Aborigines died or were killed in wars on the Australian frontier than the indigenous ‘Indians’ on the American frontier,” he says. “We knew a lot about the latter, if only from Hollywood, and almost nothing about the former. This is known as the ‘Great Australian Silence’.”

At least one old warrior is still working to disturb the long quiet.