John Paul II in Ireland: A Plea for Peace – a nostalgic popemobile trip

Review: This creaky documentary links the pope’s 1979 visit with the peace process 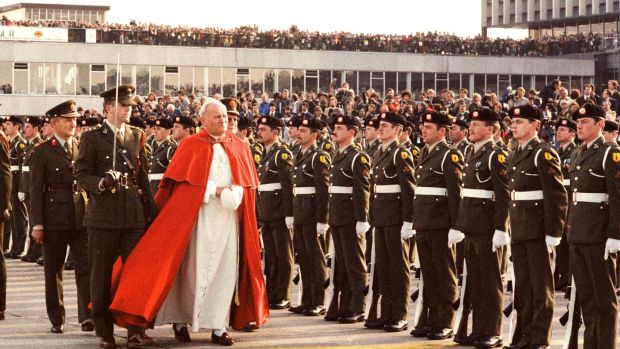 One suspects this creaky documentary on Pope John Paul II’s days in Ireland was timed to capitalise on the expected furore around Pope Francis’s recent visit. In the event, the images of a heaving Phoenix Park – unlike Woodstock, everybody who claims to have been there really was there – only serve to remind us how tepid interest was 39 years later. The two events may as well have happened on different planets.

In another sense, that is the film-makers’ point. Narrated by Jim Caviezel – a man of zealous religiosity – in the annoying present tense, A Plea for Peace argues that the pope’s visit started Northern Ireland on the path to the Good Friday Agreement.

The whole family has come along to engage in that discussion. Here’s Seamus Mallon, Dana, John Bruton, Tim Pat Coogan and Martin Mansergh. Diarmaid Ferriter turns up to help overseas viewers understand what Northern Ireland is. Fans of Senator Rónán Mullen will also get a glimpse of their hero in full flow.

Accompanied by a non-stop score that grinds on the nerves long before it evolves into the Derry Air (given this is an American production, that should maybe read Danny Boy), the film allows not a disobliging syllable about the Catholic Church as it pushes its semi-sound argument.

The reliably articulate Mansergh suggests that the pope’s call for peace at Drogheda really did place distance between the Church and the IRA. Tim Pat Coogan also accepts that the journey to a settlement may have begun at that point. Nobody says anything to shift the suspicion that the speech was just one of many seeds cast years before the important conversations began.

Those still seeking an affirmation of their faith will get on okay with it. Nobody else need waste their time.

The Mitchells vs. the Machines