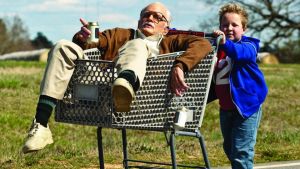 Time moves on. The late-millennial teenagers at whom Jackass was initially directed are now huddling desperately round mortgages while their own children get seduced by fresh schools of inappropriate media. Encountering a new film from the team is, thus, rather like happening upon an unreleased Monkees feature or a second Are You Being Served? movie.

The Jackass posse has, to be fair, changed its plan of attack. After simply compiling unconnected stunts for the previous film, Johnny Knoxville and (some of) the gang now pretend to tell us a story. It’s not much of a story. But the middle does come between the beginning and the end.

Knoxville plays the titular disreputable old timer – fond of sex and booze – who, after his wife dies and his daughter gets arrested, elects to drive his young grandson (an excellent Jackson Nicoll) across country to meet the boy’s ghastly father.

Along the way, in the manner of Borat, they have various run-ins with real-life people: Grandpa dances at “ladies night” in a strip club; they antagonise Hells Angels; the boy attempts to convince a passer-by to be his dad.

Only one of the skits is properly satirical and that owes quite a bit to Little Miss Sunshine: wearing a gold curly wig, the lad appals hypocritical parents at a toddler pageant by stripping lasciviously round a pole. Elsewhere, we are dealing exclusively in the comedy of embarrassment. Whereas Borat was funny in himself, the protagonist of Bad Grandpa is nothing more or less than an unconvincing old man with lavatory issues.

The trick to such humour involves persuading the audience to squirm and laugh at the same time. Bad Grandpa triggers merely the squirming, and you can get that from a mild case of haemorrhoids. No, Johnny, that is not a recommendation.

Feck! A history of swearing from the very first F to the 21st C
10