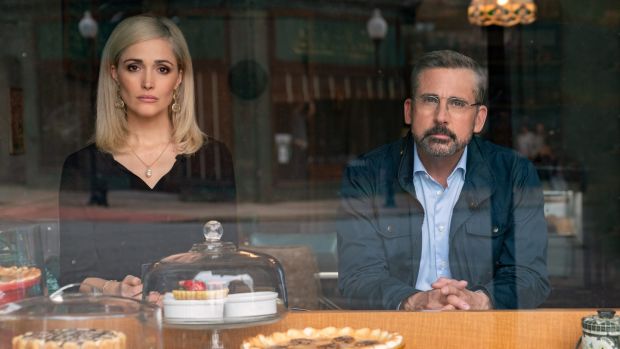 Jon Stewart, directing his second feature, has focused on a key discontent in contemporary American politics: the gulf between the coastal elite and . . . well, what? Small-town America? Heartland America? The flyover states?

Each time the New York Times tries to refine terms the alienation becomes more marked. The West Wing spent years patronising the 99.99 per cent of the population that had never been president of Harvard Law Review. Even Frank Capra, laureate of small-town honour in films such as Mr Smith Goes to Washington, was unable to resist a gee-whizz infantilization of his crusading yeomen. This is how Trump got elected, you know.

Stewart has brought an agreeable cast together to tell an entertaining story with a neat conclusion. Steve Carell massages his soft centre to give us, in the resourceful Gary Zimmer, a marginally less ruthless spin doctor than most satires and documentaries allow. (James Carville, a fellow Democrat, would mince Gary into hash and serve him with fried squirrel.)

As you might expect from a product of “the liberal establishment”, the film is harder on Faith Brewster (Rose Byrne), Gary’s profane, mendacious Republican counterpart, but even she would struggle to compete with the barracudas in the TV series Veep. The hints of sexual tension nod towards the real-life affair between Carville and Republican bruiser Mary Matalin. The dialogue is witty without drifting into stagy flourishes.

Unfortunately, Irresistible can’t quite decide upon its relationship with middle America (or whatever term we’ve settled upon). Gary’s interest is perked when he happens upon a video of Jack Hastings (Chris Cooper), a retired marine colonel, standing up for undocumented workers at a town meeting in Wisconsin. This is just what the Democrats need to lure back the Trump voters (as the script never calls them).

Gary notes that Jack “looks conservative, sounds progressive”. He’s a “Democrat, but he just doesn’t know it yet”. We don’t need to hear Lord Voldemort’s name to understand what’s oiling Gary’s cogs. Here is a way back to the heart of America. He encourages Jack to run for mayor against a supposedly unbeatable Republican.

As the story gathers heat in national media, Faith arrives to demonstrate the adhesive quality of contemporary untruths. In one outrageous moment, she claims, during a TV interview, to be a native of the town. Who among her supporters is going to believe contradictions in the (sinister chord!) Mainstream Media?

As the politicos circle, the citizens continue their amiable homespun lives. Jack does occasionally show-up Gary’s bigoted coastal worldview. Yes, the colonel can speak French. Why would he not? But, for the most part, these folk seem as comically unsophisticated as the characters in a 1950s sitcom. The lady at the diner is forever pressing coffee with cream and two sugars on Gary. When the protagonist arrives, the locals refer to him as DC Gary — because everyone here has a nickname. Almost nobody has broadband in 2024? We are on Disneyland’s Main Street USA.

Some of these notions are redrawn in a neat denouement that asks a few too many questions of the audience’s credulity. Indeed, the ending is so tidy one suspects Stewart has retrofitted his whole film around its high concept. Sure enough, now back in The Daily Show mode, the director turns up in closing credits to discuss the implications with a prominent political boffin.

The final impression is of a thesis only partially expanded into satisfactory dramedy, but, thanks to casting in depth and good writing on a line-by-line basis, Irresistible never feels like a chore. We remain puzzled as to what the Stewart Tendency really thinks of those folk in the geographical inlands. Maybe the puzzlement is the point.

Available to stream from June 26th