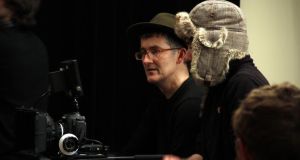 What is it with the northern counties and motorcars? Folk from that part of the island just can’t get enough of squealing tires and thick petrol fumes. For the most part, the love affair is a benign business: tinkering with carburettors, coveting motorbikes, tolerating Jeremy Clarkson. But there is a grim side to the infatuation. The latest film from Johnny Gogan – director of such pictures as Last Bus Home and Mapmaker – attempts to get to grips with the sometimes-lethal lust for speed. Set largely in Donegal, Black Ice goes among a group of young people who live to race among the twisty lanes. We know from the beginning that their obsession will end in at least one death.

So, what do we think is going on here? Gogan, who has lived in Leitrim for some years, has thought deeply about the dangerous enthusiasms.

“Well if you are not into GAA – that community thing – then there is not a great deal else for young men to do,” he says. “It’s not just about alienation. It is also about making a connection with the wider universe. My co-writer, Brian Leyden, thinks there is a correlation between bull fighting in Spain and young men in cars in the Border counties.”

Black Ice stars Jane McGrath and Killian Scott as two young people caught up in road- racing culture and in a cross-Border petrol smuggling scheme. Largely financed in the north east, utilising actors and crew from the area, the picture has a terrific sense of place to it. You feel the local culture seeping from the screen.

“Well, Donegal has always been a place apart, a separate republic,” Gogan says. “That’s true in many different ways. And in the way people handle their cars that’s particularly true. But we weren’t trying to demonise that culture. I have witnessed some real in-your-face stuff that is the careless side of all that. But at the other end there are people who are just passionate about cars.”

Gogan, a gangly, soft-spoken chap, goes on to explain that the film is seeking to address a more wide-ranging alienation among young people in Ireland. The desire to drive recklessly may be connected to anger at the current financial collapse. Pondering his own dalliances with youthful rebellion, Gogan remembers the rise of punk in the 1970s. That was also about addressing alienation through a class of aggression. But punk had, Gogan attests, a great deal more “rationale behind it”.

Gogan’s first feature, The Last Bus Home, released in 1997, dealt with the later stages of punk in Dublin. He is surely not saying that our class of rebellion is better than the sort practiced by “kids today”. Bloody young people.

“No, no. I’m not saying that at all,” he says with a chuckle. “The punk thing dissipated in the end as well. What we have just witnessed is a wider implosion in the culture. That’s what the film is trying to get at. There is a larger quagmire about the place.”

Gogan has always been a radical sort of fellow. As a young man, he travelled to South America and worked as a journalist. He learnt Spanish and connected with a very different world to that of pre-boom Ireland. Yet, while there, he became convinced that he would ultimately make his life in the home country.

“Fidel Castro always said: make the revolution in your own country,” he remembers. “In your own small way you might be able to contribute. I always liked that about Ireland. It was a country that needed change. You could influence things in some way. And I have felt that living here in Leitrim. There is a strong sense of community here.”

Gogan worked for a while as editor of Filmbase News – the publication that went on to become Film Ireland. This was a tricky time for the domestic medium. He had barely arrived back in Dublin when, in 1987, the Irish Film Board was abolished. Nonetheless, Gogan managed to get an impressive short called
Stephen made and embarked on the long march towards a feature film. At that stage, Irish films were as rare as Irish space programmes. If you got such a thing made you found yourself shouldering responsibility for the survival of the entire industry.

“Irish films were subject to so much intense criticism because so few people were getting the opportunity to do it,” he says. “That was across the sector. There was a sense of what an ‘Irish film’ should be. And the contrary views were equally fundamentalist. There is much greater pluralism now. There is a wider range of work being done despite the current crisis.”

When not burrowing away at low-budget features or developing successful documentaries, Johnny has continued to exercise his activist muscles. He has campaigned against fracking and has stood in several elections for the Green Party. Though softly spoken, he has always come across as the sort of fellow who would – if the situation demanded it – lie down in front of a tank or a bulldozer.

“I stood in Sligo-Leitrim in local and general elections,” he explains. “I was absolutely thrashed. But that was an interesting grounding when it came to dealing with the fracking issue because I understood a great deal more about local politics. And we have created a strong campaign on fracking here. We realised you can’t be completely alternative. You have to work within the system and make it work for you.”

Which brings us neatly back to the world of independent film-making. If you want a low-budget film made you will have to work with established bodies and formal institutions. Black Ice addresses important issues, but it also has its fair share of tyre-screeching action. There’s a sort of thematic compromise there as well.

“We put out a call for anybody involved in the modified car scene to help us out,” he says. We couldn’t have made the film without their involvement.”

Where else did he look? The car chase film does have its current key franchise.

“No, we didn’t watch The Fast and the Furious,” he laughs.