In pursuit of Vivian Maier, street photographer, nanny and mystery 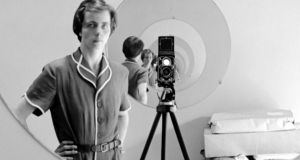 Vivian Maier: why did someone who was born in New York speak with a French accent? 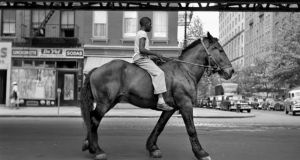 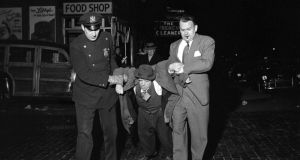 In 2005 a young real estate agent named John Maloof bought his first home on Chicago’s Northwest Side. Intrigued by the Polish villages and many parks dotted around a residential neighbourhood that stretches as far as O’Hare International Airport, Maloof became heavily involved in community preservation efforts. He went on to co-write Portage Park, a photography-based folk history book.

Hailing from a family of avid antique hunters, Maloof knew to head for a local auction house when illustrations were required. While scavenging, he picked up a box of negatives dating from the 1960s. It was pricey, but he had a good feeling about it.

“It’s hard to know what you have when you’re looking at boxes of hundreds and thousands of negatives,” says Maloof. “With every photographer, most of their work is bad. You put negatives up into the light and you’ll eventually find one good photo accompanied by a lot of bad photos or test photos.”

He saw enough to know those negatives didn’t suit the book, but, having forked out $400 for the lot, he returned to the box once the Portage Park project was completed.

At the time, Maloof had no formal training in photography, but as soon as he started to scan the negatives, he was hooked. “I knew the photographs were good, because as soon as I started looking at them, they inspired me to become a photographer myself. But once I started studying the masters and reading books, I got to realise, wow, this work is better than I thought. So I started buying up the rest of the boxes, even though I couldn’t afford them.”

The photographs had been taken by Vivian Maier, a nanny and amateur street photographer. Over the next year, Maloof would accumulate more than 100,000 negatives, 3,000 prints and random bits of film and audio, representing about 90 per cent of Maier’s work and covering a period from the late 1940s until Maier’s death in 2009.

Maloof describes an “immediate emotional connection” with Maier’s photography. He wasn’t alone. When he posted a small selection of the work on Flickr, the response was overwhelming.

“I didn’t know how it would hold up,” he says, “but once it went viral and got picked up on by people who know a lot more about photography than I do, by people with a lot of credibility, I knew I had found something really special.”

But with every image, the mystery of Vivian Maier only deepened. Why did one of “the great American mid-century street photographers”, as New York Times critic Michael Kimmelman had it, go entirely unnoticed during her own lifetime? If she had never intended for anyone to see her work, why was there such an extensive back catalogue? And why did someone who was born in New York speak with a French accent? Was she, as was sometimes claimed, a spy?

These questions form the spine of Finding Vivian Maier, an intriguing new documentary co-directed by John Maloof and Charlie Siskel, chronicling the mysterious, anonymous life of a woman who, for all the posthumous acclaim, died virtually destitute. Many of the testimonies are provided by the Chicagoan nanny’s former charges. Within these stories, there are as many contradictions as there are agreements. She was always Viv. She was only ever Vivian. Her surname was spelled Maier, Mayer or sometimes Meyer.

How does one even begin to unravel this knot of conflicting accounts? “It was extremely difficult,” says Maloof. “It took us more than four years to make the film. And the first 2½ were just research. Before we started shooting we found 90 people who knew her or had some connection. About 40 of those ended up in the film.”

Maloof was not the only person to take an interest in the late Vivian Maier. Last year, the BBC broadcast its own documentary on the subject, The Vivian Maier Mystery, a TV special that featured interviews with Ron Slattery and Jeffrey Goldstein, who were also involved in uncovering Maier’s work. Maloof insists, however, that there’s no rivalry between the two projects or between collectors.

“Not at all. That was a TV show. It was done in three or four months. Ours is a different animal altogether. It took 4½ years to complete. There is one other serious collector, Jeff Goldstein. We talk. We collaborate. We talk a lot actually. We’re friends. There is one other collector. But he’s not really connected to the world like we are.”

Maloof is clearly protective of Vivian Maier’s legacy. Working with his co-director, Charlie Siskel; art gallerist Howard Greenberg; and the School of the Art Institute of Chicago, he has helped to create the Vivian Maier Scholarship Fund for women. But his vast collection, despite appearing in galleries all around the world, has no obvious home.

“In the early days I wrote to museums like MoMA. But I think they figured it’s really hard to edit another artist’s work. How would that artist have done the printing or toning or cropping? Maybe they would have considered it if she had printed enough material for them to refer to. But also, at the time, I had no experience and no connection with that world. I’m just a guy.”

Having devoted such a sizable chunk of his life in pursuit of Maier, is he confident when he assumes editorial duties? “Well, I think I’ve studied enough to know what makes a good photograph now. Years ago, if I could have asked her anything, I would have asked why she took all those photos. Now I’d just want to know if she thinks I’m doing a good job.”

Finding Vivian Maier is at the IFI until July 24

Brigitte Nielsen on giving birth at 54: ‘I was trying until there were no embryos left’
Real news has value SUBSCRIBE