I Am Not Madame Bovary: Gorgeous, stylised example of Chinese box-office gold

Director Feng Xiaogang is a master of observational comedy in his native land, and his humour travels with some success 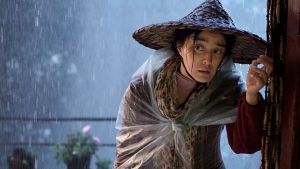 Score to settle: Fan Bingbing in I Am Not Madame Bovary

Film Title: I Am Not Madame Bovary

If it weren’t for her plastic rain cape, one might suspect that the straw-hatted, country Li (Fan Bingbing) had strolled in from the Han Dynasty. Li is a provincial everywoman with a score to settle. Her husband, a total rotter named Qin (Li Zonghan), and she have divorced. Or, as she insists, “fake divorced” with a view to swindling a larger apartment out of local authorities. The trouble is, her husband has not “fake divorced”, he has run off and got married to another woman. Li will settle for an admission of guilt and an apology until her ex publically insults her – “On our wedding night you admitted you had sex with other men before me: your name is Pan Jinlian.”

Pan Jinlian, as the wry, helpful narrator (Liu Zhenyun, here adapting his novel I Did Not Kill My Husband) has already explained, is a fictional fallen woman. Bovary is a close enough Anglophone (or Francophone) titular stand-in. Li responds by doggedly pursuing her case, moving through governmental and judiciary ranks – county chief, protectorate, chief justice – and all the way to Beijing, where a high-ranking bigwig is most vexed to hear how those down the ladder have dismissed ‘one of the people’. Li’s man trouble is now trouble for everyone.

In China, director Feng Xiaogang is a box-office superstar whose observational comedies – often written in the Beijing dialect – have been known to out-perform Marvel’s finest. Feng’s winning formula hinges on the hesuipian or New Year’s celebration film. Taking a cue from Hollywood’s tent-poles, the director releases big entertaining films with big, beloved stars attached on major holiday weekends. These same movies are well-reviewed at home but, to date, have proved a little too populist, to transfer seamlessly to the international film festival circuit.

I Am Not Madame Bovary, though a commercial smash in the PRC, looks like a conscious attempt to follow China’s arthouse auteurs into the global marketplace. Gorgeous and heavily stylised, the film breaks eye-lines rules with 180 flips while unabashedly emulating traditional ink-wash painting. Every tree and rooftop reminds one of silk scrolls or Chinoiserie wallpaper.

This painterly effect is compounded by cinematographer Luo Pan’s formatting: almost every frame of the heroine’s journey is presented within a circle. Scenes in Beijing, meanwhile, are funnelled through a narrow, vertical rectangle: a banner for a city defined by banners. Tanggu drums and other traditional instruments alternately pound and soften the soundtrack. Bingbing heads a terrific ensemble, although the sly anti-bureaucratic fun does feel a little overextended at 137mins.

Harlots? It’s all pumping buttocks from the men. Which is fair enough
6 Dublin drug baron's sentence marks end of an era for trafficking gangs
7

Shooting soldiers in a handball alley: Amelia Stein’s The Bloods
8

‘My legs, stomach and solar plexus turned to jelly when Aretha Franklin started to sing’
9