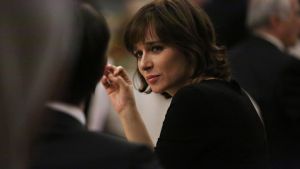 Well, you know where to look for the best yarn of the week. On the surface, Human Capital sounds like a 1980s soap operas about decadent industrialists with harridans for wives. There’s some of that going on. But the knottiness of the plot and the brilliance of the performances mark it apart.

The story hangs around a late-night car accident. Some may argue that the late discovery of a hitherto unseen character is a bit of a cheat, but that trickery does allow Virzì to sideswipe carefully built-up assumptions. At any rate, the film is as much a social satire as a mystery story and, in that area, it works very well indeed.

Human Capital, whose title is drawn from the world of insurance, is sickened and dizzied by the inequality and recklessness that characterises modern commerce. The weak are misused. The strong prevail. Unscrupulousness brings its own sordid rewards.

The baddies have fun with their roles, Gioli is charismatic, but the most interesting performance comes from the gifted Bruni-Tedeschi (sister to Carla Bruni). Celia is inclined towards virtue, but hasn’t quite got the courage to fight against her husband’s tyranny. She’s not a hero. She’s not quite a coward. She’s like most of the rest of us.

John Boyne: Why I support trans rights but reject the word ‘cis’
10