House of Cardin: A long life in couture 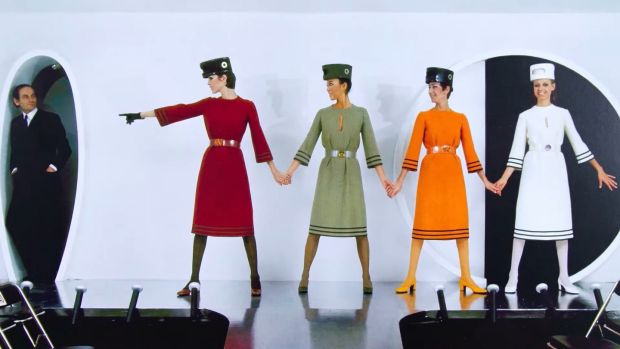 The House of Cardin’s defining period was the pop-futurist 1960s.

More than a few documentaries on artists – and we can surely call Pierre Cardin that – thrive on the history and then splutter when dealing with the present day. The glory years are more interesting than later consolidation. If we have the Great Person in the room it’s hard not to allow adulation to overpower interrogation.

Such is the case with this entertaining examination of the couturier who, like his great rival Yves Saint Laurent, lent his name to an attitude and an industry.

The route up is fascinating. Born in Italy, Cardin fled Mussolini with his parents to suffer a tough upbringing as exiles in France. After working for the Red Cross during the war, he made his way to Paris and blundered into the fashion industry. Connections with Jean Cocteau helped. His own gifts helped more.

As the flashy, buzzy visuals here push home, the House of Cardin has endured for decades, but its defining period was the pop-futurist 1960s. Geometric designs on artificial fibres. Moulded bubble dresses for women. Cheeky peaked caps for men. Cardin’s clothes were never cheap but, as the film explains, he was among the first haute couture designers to sell off the rail.

House of Cardin drags out fascinating archive interviews to tease and tantalise. Cardin is articulate about his creative strategies, but the man inside remains something of a mystery. We know that he had a long affair with Jeanne Moreau. Colleagues mist over when discussing the death from Aids of his later life partner André Oliver. As one contributor notes here, in those far-off days celebrities were allowed a tad more privacy than they have now. His sexuality was nobody else’s business.

House of Cardin, to paraphrase the briefly glimpsed Madonna, gives good face. Sharon Stone and Naomi Campbell, on neither of whom the years have laid a scratch, are here to talk up their favourite dressmaker (Campbell profited from Cardin’s willingness to challenge the overwhelming whiteness of the postwar catwalk).

This is all pleasant enough. The contemporary interviews with Cardin – who died less than six months ago – are, however, not nearly so challenging as the footage of him in his prime. There is a sense of mild hagiography being wrapped around an otherwise tasty history. It is too often thus.