Director Ben Wheatley knows how to unsettle, and the cast are immaculate, but it’s not enough to sustain this monolith of a film 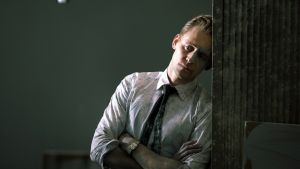 JG Ballard – a writer indifferently served by cinema – acknowledged that his early experiences in a Japanese prisoner-of-war camp exposed the thinness of the veneer on 20th century civilisation. Ballard’s dystopian fiction repeatedly prised away that layer to reveal the atavistic instincts within.

The veneer is maybe a little too slight in Ben Wheatley’s breathlessly anticipated take on a key Ballard text. Published in 1975, High Rise imagined an apartment block whose inhabitants occupy altitudes that correspond to social class. The masters of the universe live in the penthouse. Plebs occupy the ground floor. Tensions eventually crack the uneasy equilibrium and a local war breaks out.

In the film, nothing much “breaks out”. This infuriatingly disordered film begins in chaos, moves on to anarchy and ends in out-and- out pandemonium.

No blame attaches to the cast. Tom Hiddleston gleams metallically as (catch the allusion, anti-psychiatrists) Robert Laing, a young doctor who occupies an upper floor. Sienna Miller continues to impress as a single mother with appetites. Luke Evans prowls with carnivorous menace as an amoral documentary film-maker. Jeremy Irons, Elisabeth Moss and Keeley Hawes are elsewhere.

The project is as besotted with Heath-Wilson Britain – even closing with a speech by Mrs Thatcher – as Jackie readers were once with David Soul. The rivers of sweet German wine and Watney’s Red Barrel wash away any hope of universal significance.

Ballard wrote about his time, but he must surely have hoped that any future treatment would have things to say about its own era. Wheatley’s film settles for a convincing simulacrum of how an inventive (if disorganised) film-maker from 1976 might have imagined 1980.

Yet this is still clearly the work of febrile talents. Were any intelligent punter to be plonked down to watch any five minutes of High Rise, he or she would surely be eager to see more. As Wheatley and writer Amy Jump showed in Kill List and A Field in England, they have a real thirst for very English forms of cinematic unease.

What a shame those sequences don’t mesh together into a cohesive whole. High Rise really could end at any point. Mind you, when it does end it allows us a blast of Industrial Estate by The Fall.

So, much (if far from all) is forgiven.