Will today’s creepypasta kids still enjoy such silly fireside supernaturalism? We do hope so 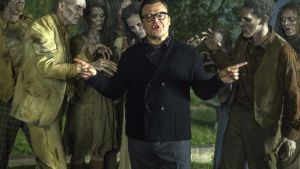 When Hannah disappears, Zach and awkward teen Champ (Ryan Lee) attempt a rescue mission, not knowing that Mr Shivers is, in fact, the kids’ horror fiction writer RL Stine, and that their actions will unleash all of the author’s spooky creations upon their hitherto tranquil borough.

Will the plucky teens and the cranky reclusive author restore order to a town overrun by murderous garden gnomes, the Abominable Snowman of Pasadena, the Werewolf of Fever Swamp, giant flesh- eating plants, the Blob that Ate Everyone, a monstrous preying mantis, aliens, robots, zombies and - worst of all - Slappy, the “ventriloquist’s dummy with a Napoleonic complex”?

It sounds like a cash-in but the premise proves a neat way to revisit Goosebumps’ Greatest Hits. Over-the-top CG effects ensure that the monsters are not too fearsome and lively, witty exchanges ensure there’s fun even for milquetoast viewers:

“Why couldn’t you have written stories about rainbows and unicorns?!”

“Because that doesn’t sell 400 million copies!”

The triumvirate of young actors are charming but, inevitably, it’s Mr Black who steals the show with his patented, hilarious bellowing. Will today’s creepypasta kids still enjoy such silly fireside supernaturalism? We do hope so.