Fanboys everywhere rejoiced when Gareth Edwards, director of the indie hit Monsters, was named as the man to reboot Godzilla. His mum, however, was a little less excited . . . 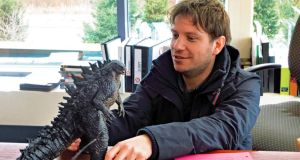 We’re delighted to learn that Gareth Edwards, the newest custodian of the Godzilla franchise, can sing most of the theme song from the much loved 1978 animated series. Remember the cartoon? Remember the cutsey-pie Infant Godzillasaurus, Godzooky? Gareth Edwards does.

“I’m older than you think,” he laughs. “As soon as my friends found out I was working on Godzilla they all started singing the ‘Godzooky’ part of the theme song. Unfortunately, I played along and so did my phone. So I ended up sending some emails to major studios with Godzilla autocorrected to Godzooky. Which can’t have looked good. Not when they’ve just hired me to work on their major summer blockbuster.”

In 2010 Edwards, a visual effects artist, won acclaim and cult hero status as the first time writer-director of Monsters, a spirited and inventive alien invasion picture. The film was subsequently nominated for a Bafta, won three British Independent Film Awards and made $4,242,978 back from its miniscule $500,000 budget.

Still, nobody, including the film-maker, could have guessed that his sophomore picture would be the $170 million-budgeted Godzilla.

How did that phone call go?

“It was all a bit strange. I was on a promotional tour of Northampton – I think – with Monsters. And I got a call from Legendary Pictures asking if I had any ideas to contribute. But I was so busy doing interviews and introducing screenings that I didn’t really have a spare second to think about it. I didn’t end up with time to prepare anything. But I must have said something right.”

Movie fans likely recall that the last time Legendary Pictures tapped up a hot new British talent, he turned out to Christopher Nolan. Edwards ought to have been able to celebrate his enviable new position. But instead, bound by the secrecy that shrouds all major tent-pole releases, he couldn’t even tell his parents.

“I went home that Christmas and all my family are asking me ‘How’s it going?’ and ‘You working on anything?’ And in my head I’m shouting: ‘I’m working on Godzilla!’ But I couldn’t say it. So months later, I get a phone call from my agent telling me that the story has been leaked and that it’s all over the blogosphere. So I called my mum and told her ‘I’m working on Godzilla’. And because she’s my mum and because I said it nervously, she assumed I was in terrible trouble. So her first response was: ‘Can you get out of it?’ She and dad thought it was like jail or something.”

Born in Nuneaton and schooled in Surrey, Edwards had no obvious connection to the world of the $100 million spectacle. But the 37-year-old, who cites George Lucas, Steven Spielberg and Quentin Tarantino as his primary influences, has always been a dreamer on a monstrously big scale. From the age of six, he watched Star Wars: A New Hope every day. After college, he joined the BBC as a handmade SFX whizz, working on the historical part-works series, Heroes and Villains, and on the Sundance winning documentary, In the Shadow of the Moon.

“I honestly think that if I had grown up in Hollywood I might not have been so interested in making films,” he says. “Part of the attraction was that the world of film-making seemed so exotic and far away. The biggest appeal for me was it felt like leaving the farm and going to Oz. Most people have impossible career dreams when they’re young. They want to be a spaceman or Spider-Man or whatever; this was mine.”

Post-Monsters, critics called him the “Bedroom James Cameron” and interested parties on the internet cheered when he signed on for Godzilla. Amidst the kerfuffle, Edwards kept on working exactly as before.

“As a director, you really only talk to the heads of your departments and not the 200 or 300 people who are working on the movie every day. Most conversations happen between you, your assistant director, the cameraman and your actors. I only really got to know about 20 or 30 people. So you can convince yourself that you’re making a much smaller film with just a handful of friends. If there was a quiz at the end of filming asking me about the names of my crew, I’m afraid I’d get a very low score.”

Edwards’ Godzilla turns out to be a very different beast to the one found in Roland Emmerich’s unlovely 1998 reimagining. Aesthetically and thematically, Godzilla 2014 harks back toward Ishiro Honda 1954 original version. The monster is immediately recognisable as the creature who emerged from Japan’s Toho Studios some 60 years ago. In fact, Edwards tried to imagine the beast as a real animal who emerged briefly in the 1960s, inspiring terror and a sequence of Godzilla movies.

“When you make a film called Godzilla you should make sure that it is Godzilla in your movie,” insists Edwards. “Toho, who did the original Japanese films, had a list of things that they felt were crucial for Godzilla. But that list was shorter than my own list.”

“The first film was a metaphor for Hiroshima,” says Edwards. “People say that science fiction is not about the future; it’s about the present. From my point of view, when I sat down and asked myself what would happen if a monster appeared off the coast and then destroyed a city, I decided it would be harrowing and life-changing event. So why not treat it with that kind of respect? Unfortunately we have all seen these events on TV and have reference points. We did talk with our Japanese partners about it. And we all agreed that we should raise questions about nuclear power.”

“It’s those same big movies,” says Edwards. “The style of film that has influenced me the most reflects the big, big movies I grew up: Lucas, Spielberg, Cameron. If we had a style guide on set, it was somewhere between Close Encounters and Jaws. I don’t want to compare to those classics. But that was definitely the kind of film-making I hoped to emulate. I wanted characters that you could completely believe in.”

Sex and the Irish: We were always a law unto ourselves
6

Unthinkable: How do we ‘know’ anything?
Real news has value SUBSCRIBE