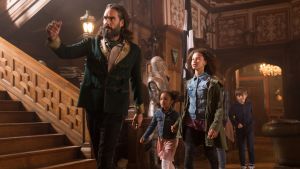 Film Title: Four Kids and It

Here comes the meta-textual bit. This pleasing, old-fashioned adaptation of Four Children and It – a 2012 novel by author Jacqueline Wilson based on the 1902 book Five Children and It by E Nesbit – is a perfect marriage of Wilson’s keen social awareness and turn-of-the-century magical fantasy.

Working from a screenplay by Simon Lewis and Mark Oswin, Andy De Emmony’s film opens with a knowing nod to Nesbit. “What’s this about?” 13-year-old Ros (Teddie-Rose Malleson-Allen, young sister of Lily and Alfie) asks a bookseller as she thumbs a copy of The Five Children.

“Kids, magic, wishes that cause trouble,” comes a reply that doubles as an elevator pitch. Ros remains sceptical but soon enough the book she dismissed as sounding “a bit young” becomes a users’ guide.

None of the youngsters is happy about the arrangements, but they do, at least, find a diversion in the Psammead, a wish-granting, sand-dwelling hairy fairy voiced with an agreeable degree of cantankerousness by Michael Caine.

In common with the 1902 E Nesbitt classic, the Psammead’s wishes only last for a day, so they must choose carefully. Spoiler alert: they don’t always choose carefully. Unhappily, a creepy neighbouring landowner (Russell Brand, actually twirling a moustache) is on to the kids’ magical discovery and wants to steal the creature for himself.

The CG flying sequences aren’t exactly Marvelverse quality, but the retro tech specs turn out to be as charming as the cast, and Wilson’s understanding of blended family dynamics survive the transition to the screen.

How I learned to love Seamus Heaney’s poetry
8