Fast and Furious 7 review: much too fast, all too futile

The tragic and sudden death of actor Paul Walker is the least of this bombastic, mutton-headed sequel’s many problems

Noam Baumbach's latest wry take on hipsters versus the others is reviewed by Donald Clarke, while Tara Brady is Fast and Furious. Video: Niamh Guckian 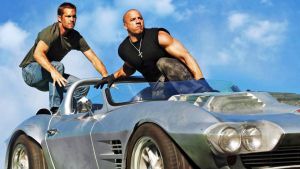 Sequelitis is an affliction that can strike any given franchise at any given moment. There is no known cure,though researchers have had some success with the experimental JJ Abrams antidote. The characteristics remain distinct: everything in instalment X + 1 is now bigger and louder and more expensive than it was in the property X.

Trust Fast and Furious to decide that if episode 7 had sequilitis, it was going to have the biggest, loudest and most expensive case of sequilitis ever. Even the girlfights come with ball-gowns.

In this spirit, we get every action hero not contracted to The Expendables and even some that are. What is the correct collective noun for a group that comprises Vin Diesel, Dwayne Johnson, Jason Statham, Kurt Russell and Tony Jaa? A kaboom of tough guys? A sirloin of six-packs? By the end, we’re just waiting for a digitised John Wayne to ride into the melee.

Duke might as well: the production was already a troubled affair when, half way through the shoot, Paul Walker was killed in a car crash. Thus, the final cut is littered with body doubles and pixelated chicanery.

This is not enough to paper over the cracks of a film that saw Justin Lin (who presided over the sequence since Furious 3: Tokyo Drift) walk away over an underdeveloped screenplay and insufficient prep time.

The set pieces are so big and vulgar that the team are obliged to make a detour into Abu Dhabi. A ludicrous hacking subplot is lifted straight from The Dark Knight.

Despite the lengthy and sentimental tribute to Walker in the closing scenes (montage, ahoy) his absence is not as keenly felt as Lin’s. Replacement director James Wan (Saw, The Conjuring) may be a dab hand at things that go bump in the night, but action is not his strong point.

Throughout, fight sequences and car chases – the nuts and bolts of the franchise – are hacked into a Tourette’s flurry of uncontrolled fast cuts.

Cutting up a Tony Jaa fight in such a manner is rather like colourising Citizen Kane or adding dimples onto the Mona Lisa. But it is, alas, typical, of the film’s belching grandiloquence.

Outdoors is the future of live performance, and it’s time to get it right
5