Fanny Lye Deliver’d: The dampest spectacle you will see this year 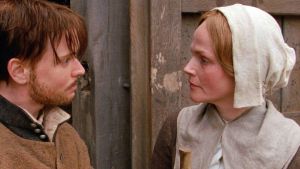 It’s 1657 and rural Shropshire in post-civil war England is a crazy place to be. One mightn’t know as much watching the opening sequence of Fanny Lye Deliver’d, in which the title character (Maxine Peake) grimly attends to her stern Puritan husband John (Charles Dance) and her duties at their muddy farm. John is a former captain in Cromwell’s army and he maintains an equally brutal regime at home, wherein Fanny and the couple’s young son (Zak Adams) are beaten for such transgressions as merriment.

One Sunday, as the family trudges to church, a pair of naked ranters – Thomas (Freddie Fox) and Rebecca (Sex Education’s Tanya Reynolds) – take refuge in the Lye homestead. Thomas claims to have served under Cromwell, a detail that impresses John enough to lie to the sinister “poppinjay” magistrate (Peter McDonald, terrifying) who comes looking for the renegade couple. Pinteresque terrors ensue.

Thomas Clay, although not as well-known as contemporary auteurs Ben Wheatley and Peter Strickland, is one of Britain’s most intriguing film-makers. Arriving some 12 years after his controversial debut The Great Ecstasy of Robert Carmichael and eight since his second feature Soi Cowboy, Fanny Lye Deliver’d was a labour of love for Clay, who wrote, directed, edited, and scored it.

With an impressive attention to detail, the farmhouse was built, the roof was thatched, and the music was performed using 17th-century instruments. That may sound obsessive but it makes for the dampest spectacle of the year; to watch Giorgos Arvanitis’s cinematography is to shiver.

The narration, delivered by Reynolds, doesn’t always work, but the twists and turns do. Just as Dance’s patriarch looks set to rival his Tywin Lannister in Game of Thrones, he’s brought low by warring ideologies. Peake’s evolution onscreen is a marvel.

Clay has described the film as a Puritan western, but it is equally a home invasion horror, albeit with an eye on such Cromwellian fare as Witchfinder General.