Everest review: Why see it? Because it’s there

This week, Donald reviews the adaptation of Bill Bryson's memoir A Walk in the Woods, and Tara reviews disaster drama Everest. Plus, Donald talks about The Jungle Book and the long list of Disney remakes headed our way. 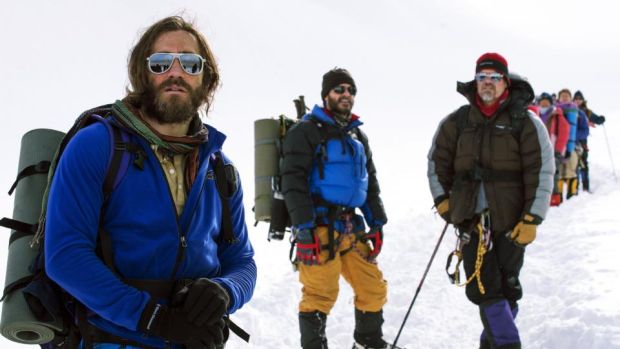 Among the lesser problems afflicting this mountaineering adventure is its indulgence of the climbing community’s determination to treat “summit” as a verb. “When do you intend to summit?” one fellow will ask. “We will summit on Friday,” another might reply.

We are tempted to suggest that the fllm-makers potboiler and melodrama their way to an only modestly successful conclusion. But that would be beneath us.

The technical side of the operation is carried off with some efficiency. Everest concerns itself with a tragic incident from 1996 during which as many as eight climbers died. William Nicholson and Simon Beaufoy (writers of, respectively, Gladiator and 127 Hours) work hard at insinuating meteorological and geographical details into a script that, inevitably, becomes more skeletal as the blizzard closes in.

The film is particularly interesting on the way commercial operations lured amateurs to a climb that was once the preserve of the most daring and gifted professionals. And, making good use of Imax (and less good use of muddy 3D), Baltasar Kormákur savours the yawning depths beneath perilously placed ladders and dangling New Zealanders.

The problems with Everest are mostly to do with characterisation. To be fair, the screenwriters are playing an unpromising hand. It is proper that they be respectful towards both the survivors and the victims of the catastrophe. That means that few broad gestures are employed when constructing personalities.

The one exception involves, perhaps, Josh Brolin as Beck Weathers. The Texan, first seen bustling towards base camp in a Dole/Kemp ’96 T-shirt, soon emerges as the sort of chap who believes all problems can be solved by the liberal application of capital.

Elsewhere, the script tiptoes gingerly around the real-life characters – most of whom had day jobs – as they prepare themselves for an assault on the peak. Jason Clarke is caring as Rob Hall, expedition leader. John Hawkes seems a little frail as Doug Hansen, a postman who has failed in the past. Jake Gyllenhaal plays Scott Fischer, rival adventure entrepreneur, as a seat-of- the-pants renegade.

It defies belief that Robin Wright and Keira Knightley were persuaded to sign on for colourless wife-of-the-hero parts. (Emily Watson does have a little more to do as Hall’s professional partner.) Has mainstream cinema nothing better to offer such distinguished actors?

In a properly fictional disaster movie, the film-makers would be free to distinguish their large dramatis personae by granting them chiselled types. This fellow is a cad. This chap is a snivelling coward. That bloke is the person Robert Wagner used to play. And so on. Here, the characters are so wispily drawn that it is hard to care about their fates or worry about their personal interactions.

Actually, it’s worse than that. As the snow picks up and the climbers further obscure bearded faces with goggles and hoods, it becomes hard to even tell one from another.

The awareness that this awful fate did befall real people certainly casts an emotional pall over the closing 20 minutes. By confirming that it was, by then, possible to talk to loved ones while facing up to imminent death, the film adds further poignancy to the situation.

But Everest never satisfactorily explains why any sane person would put himself or herself in such icy peril. More seriously still, it doesn’t create a convincing world of its own within which the viewer can become satisfactorily immersed.

In short, this is one of those movies that should have been just a little dumber (more like The Towering Inferno) or a little smarter (more like 127 Hours).

Why see it? Because it’s there, I guess.

Donald Clarke: Sing it with me – the musical will outlive its boring detractors