Actress Emily Browning on her role in new film ‘Legend’, about the Kray Twins 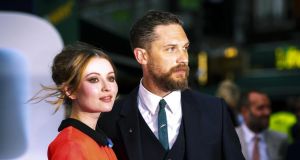 Emily Browning gets to make an entrance. I am sitting at the far end of a very grand room in the Soho Hotel when the Australian actress – literally dazzling in sightscreen white – is escorted from the foyer to a lime sofa.

She’s wearing an extraordinary skirt by Maje that seems inspired by the plastic packaging they wrap around wine bottles. (It’s much nicer than that makes it sound, but that’s the best I can do.) She is as chipper as any 26-year-old with a fizzy movie career ought to be. What’s that tattooed on the inside of her right arm?

“That’s a new one that I’m not prepared to reveal yet,” she says, curling the wrist inwards.

I can just about make out a quote on the other arm. It’s from the choreographer Martha Graham: “a blessed unrest that keeps us marching”.

“It’s in this letter given from Graham to Agnes de Mille,” she says. “It was given to me when I was 21 and feeling very unsure of what I was doing. I was thinking: no matter what I do I never feel happy with the work that I’ve done. That made me feel that it’s okay to live in the unknown. It’s the feeling of restlessness that pushes you forward.”

Browning, who this week appears opposite Tom Hardy and, erm, Tom Hardy in the Kray twins drama Legend, turns out to be a person worth listening to. Impressively articulate, she manages a degree of self-analysis that, though probing, never comes close to solipsistic baloney.

She is Australian, of course. We don’t wish to deal in stereotypes, but you don’t often find citizens of that country losing themselves in the psychological undergrowth.

“When I first went to LA, I was 14 and I hated it,” she says. “I’ve found my neighbourhood now and I love it. But London is my favourite. People here understand our sense of humour. Right? I always offend people when I tell a joke in LA. People here are more cynical and sarcastic. I like that.”

Before the camera since she was 10, Browning broke through as Violet Baudelaire in the under-appreciated 2004 adaptation of Lemony Snicket’s A Series of Unfortunate Events. Her striking looks and snappy way with a line would have ensured a healthy juvenile career, but Browning had other ideas.

“I was all set to live in LA and have a tutor and continue acting,” she says. “Then I decided I wanted to go home and finish high school. I never fell out of love with acting, but I didn’t like the world. I didn’t want to be a child actor. I missed the high-school environment and feeling like a normal kid.”

Like so many child actors, Browning fell into the business by accident. Raised just outside Melbourne, she endured some traumatic early years before winding up at the progressive Eltham High School, where she was encouraged to appear in plays. Another parent spotted her talent and suggested she might like to audition for an imminent TV drama.

Browning’s parents (who sound like eminently sensible coves) were very wary, but, assuming she wouldn’t get cast, allowed her to attend the audition. She secured the part and a successful career followed. She was in Gregor Jordan’s Ned Kelly and the 2002 horror Ghost Ship.

I imagine she must have encountered a few less-well balanced stage parents along the way.

“Yes, I remember one of the parents taking me into the trailer and giving me direction. ‘This is how you do this and that.’ My mother was sitting there, mortified. Afterwards she said: ‘You know you don’t have to do any of that.’ I was doing it because I wanted to do it. My parents were very clear that if I ever got uncomfortable I was to stop.”

She remembers being dazzled by the size of the Lemony Snicket production. This was, after all, a Jim Carrey film when Jim Carrey was still among the biggest stars on the planet. “The money on display was amazing. Whatever I wanted to eat they would make for me,” she says.

It, thus, is all the more impressive that she made the sober decision to head back to Australia and take up her studies. When she returned to the profession, she immediately demonstrated a determination to live up to that Martha Graham quote. Julia Leigh’s Sleeping Beauty, which played in competition at Cannes in 2011, saw her playing an Australian student who works as a sort of specialist sex worker at night.

“I remember everybody saying how brave I was at Cannes,” she laughs. “But I couldn’t really see it. I have a tendency to over-think and intellectualise my life too much. My acting allows me to just follow my gut. That’s quite different. Gratuitous nudity is one thing. But in that film, I liked the fact that the nudity was there to make audiences uncomfortable.”

What of Zack Snyder’s Sucker Punch from the same year? The hugely derided film saw a scantily clad Browning join equally provocatively attired actresses such as Abbie Cornish in a mad fantasy that was denounced as exploitative from every corner.

“I totally get it,” she says in admirably good spirits. “I look at that now and I see where we went wrong. It was a fascinating thing to play a character who was objectified, but could go into a fantasy world and terrorise her attackers.”

Browning wearily admits that there are still too few good roles for women in mainstream cinema. She says she read 150 scripts after shooting Brian Helgeland’s Legend. “Often the film is good, but you’re playing the girlfriend role,” she sighs.

As it happens, she is playing Reggie Kray’s girlfriend and, later, wife in Legend, but Frances Shea is a properly fleshed out personality. Indeed, the action of the film swims around her. We see the expansion of the hoodlums’ East End empire through her eyes. Browning does a very impressive cockney accent and manages a convincing combination of sass and vulnerability.

“I watched a lot of Barbara Windsor videos,” she says. “It was interesting. With Frances narrating, I hope we found a balance in not glamorising them. We see them being gangsters and then we come back and meet Frances and realise that real people are being damaged.”

There is some “blessed unrest” in there. Browning looks to be staying true to principles that are hard to maintain in a cutthroat industry. What next?

“Somebody said to me – it was a quote I think – that you can have either peace or freedom in life,” she says. “At 26, I’ll take the freedom. The peace can come later.”

Legend is out now