Embrace of the Serpent review: Skullduggery and atrocity in the Amazon 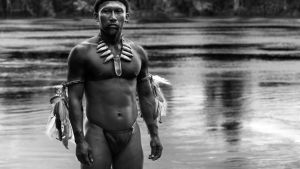 Last of the Amazonians: Nilbio Torres as Karamakate in Embrace of the Serpent

Film Title: Embrace of the Serpent

Over a century on from sinister talk of the White Man’s Burden and more slippery ponderings on the Heart of Darkness, we now expect art on the postcolonial experience to side unambiguously with the occupied. This offers film-makers such as Ciro Guerra a challenge. What horrors are left to reveal? What grim surprises can still be sprung?

Guerra finds plenty of both in this thoughtful, often blackly funny wilderness epic. Hanging around two adventures down the Amazon, separated by 40 years, the film casts inevitable shadows of Aguirre and Apocalypse Now, but, shot in a steady monochrome, only occasionally giving into hysteria, Embrace of the Serpent is very different in tone to those brash films. Look to Miguel Gomes’s Tabu for the most useful recent comparison.

Embrace of the Serpent pits Karamakate, an Amazonian shaman of towering aspect, as the last representative of a vanquished people. The earlier journey begins with Karamakate (then played by Nilbio Torres) encountering the gaunt, ailing anthropologist Theo (Jan Bijvoet) in 1909.

There is something of Quixote about this bearded scarecrow; he even has a Sancho Panza in the form of a westernised native. But the hostile Karamakate discerns wisdom and, encouraged by the promise of encountering a few surviving members of his tribe, escorts Theo to the source of a healing herb.

In a parallel story, set during the second World War, we find the elderly Karamakate (Antonio Bolivar) meeting an American explorer (Brionne Davis) and ferrying him in search of the same fabled narcotic.

The film is let down by some new-age baloney and a late psychedelic sequence that recalls the last frames of Fr Ted’s My Lovely Horse video. Otherwise, this remains a singularly insidious, visually stunning adventure that really does find news ways of skewering the colonial atrocity.

Little in a film full of horrors is quite so chilling as the camera shot that, while moving towards a group of children singing carols in a mission, passes beneath an archway hung with stocks, butcher’s hooks and wire nooses. Forty years later, one Christian mission has become further corrupted into a personality cult that again brings us back to Heart of Darkness.

There’s more elsewhere. Even Conrad might be shocked by the poor slave who, one arm already hacked off, preys for death as the only reasonable relief from work on a rubber plantation.

Embrace of the Serpent swells with such unhappy images, but it is also fired by poetry and, in Karamakate, it has one of cinema’s great stubborn heroes. Not to be missed.