Electricity review: firing on all synapses 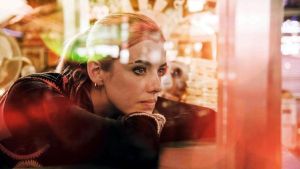 Lily O’Connor (Agyness Deyn) is a pretty girl working in a change kiosk at a seaside amusements. She suffers from epilepsy: and we do mean “suffers”. Her condition was caused by an abusive mother who threw her down the stairs when she was just two.

Lily’s seizures are severe. There are trippy hallucinations and something like internal lightning storms, effects that are hauntingly approximated in Bryn Higgins’s theatrical debut, with splendid work from cinematographer Si Bell and the effects departments. Lily carries on regardless: “Thrash, get up, get on with it” is her mantra.

When she learns that her estranged mother has died, Lily is reunited with her ne’er-do-well, poker -playing brother Barry (’71’s Paul Anderson), who wants to split the proceeds from the sale of the family home.

She accepts, but only if the siblings cut it three ways by including their long-missing brother, Mikey (Christian Cooke). Barry suggests that Mikey is likely to be dead; others say he may have disappeared into the capital’s homeless population.

But that doesn’t deter Lily from travelling to London to play gumshoe. She soon encounters a kindly, middle-class lesbian (Lenora Crichlow), a mean-spirited former sister- in-law (Alice Lowe), and a cocksure charmer (Ben Batt). Some of these people are not what they seem; others are precisely as they appear.

A sensorial, yet sneakily impactful experience that might sit comfortably between Carine Adler’s Under the Skin and Lynne Ramsay’s Morvern Callar, Electricity cunningly mirrors its heroine’s consciousness by lulling viewers into a muffled space before hurtling them to the ground.

Deyn, once best known as the former Mancunian model who married Giovanni Ribisi, proves her worth as an actor with a mesmerising central turn. The supporting cast is top-notch.

Christmas counterprogramming at its finest.