Ed Skrein, who takes over from hardman Jason Statham in the Transporter franchise, explains his unusual career path 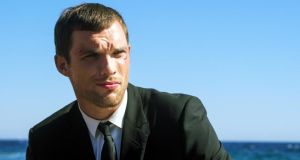 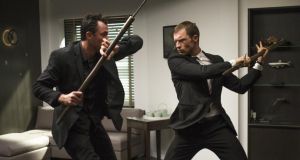 It can’t be easy taking over the key role in an internationally successful action franchise. Just ask George Lazenby (if you can find him). It helps if you have a story to tell, and chiselled, articulate Ed Skrein, who is about to grab the steering wheel from Jason Statham in the Transporter series, seems to have lived five or six successful lives in 32 short years.

If his potted biography is to be believed, Skrein, star of The Transporter Refuelled, has been a hoodlum, professional swimming coach, rapper, qualified artist and, now, movie star.

Let’s start with the first of those. When promoting Ill Manors, the excellent London gangster flick directed by his pal Plan B, Skrein was described as having drifted into crime as a teenager. It was said he was in a gang and, after getting stabbed, shook himself towards stability.

“There was some truth in that,” he says. “But it’s been massively exaggerated. Some of the stuff that was written was crazy. I grew up in London and you do see things there. I was just mischievous. It was said I was in a gang. I really wasn’t. I didn’t want to be a bad guy. I learnt that I had to change. I found the positive path and I am still on that.”

Let me try and get this in order. As a teenager, Skrein hit the pool, excelled at the breaststroke and ended up setting up his own swim academy. But he also found the time to complete a degree in fine arts at Central Saint Martin’s College (alma mater of Alexander McQueen, Jarvis Cocker and PJ Harvey).

“Yeah, that was such a wonderful time,” he says. “That was the beginning of my creative expression. I was surrounded by people from such different walks of life. We talked about me being stabbed. We talked about stuff from outside of my world. That opened up my mind to the wider world.”

I have rarely met a person who seems so focused on education and personal development. On at least four occasions during our brief conversation, Skrein talks about his desire (then and now) to “learn” from professional and personal experience. The slight whiff of self-help is dissipated by the realisation that he really has achieved such a great deal.

“I was a very expressive and aggressive painter,” he says. “I was influenced by Keith Haring, Cy Twombly and Jean-Michel Basquiat.”

Yet, somehow or other, Skrein found himself being eaten up by the London hip-hop scene. It’s hard to imagine him “drifting” towards music. If this conversation is any measure of the man, Ed thinks strategically about his every move in life.

Under the name “Skrein”, he recorded a swathe of recordings in the second half of the last decade. Records such as Pre-Emptive Nostalgia and The Eat Up – swinging from sluggish r’n’b tempos to percussive hip-hop – are well worth investigating.

“Back then there was so much unity in that world,” he says. “There was so much feeling. We had people like Skinnyman and Kalashnikov. I learnt so much about endeavour. We built up a real work ethic. We’d work till six o’clock in the morning. We were romantic. We loved the underground. When I didn’t feel the need to do that any more, I just left. I can just walk away and say: that’s enough.”

Skrein is happy to state that he never made much money from the music, but, by that stage, he was already a respected swimming coach. He had opened the academy and was shepherding young proteges to national prominence.

“I was shooting The Transporter,” he says, “and, one day, I ended up being late – I’m never late – because I wanted to watch one of my swimmers compete in the breast stroke at the national finals. I was so proud.”

We still haven’t got to the acting. He first appeared in a short film by Plan B – who directs under his real name, Ben Drew – and later ended up with a lead role in that rapper’s unexpectedly excellent feature debut, Ill Manors.

That was such a difficult low-budget shoot that Skrein swore he would never act again, but offers soon came flooding in. He played Daario Naharis in Game of Thrones. Next year we will see him opposite Ryan Reynolds in the much-anticipated , rough-edged superhero flick Deadpool.

Before then, he has the challenge of stepping into The Stath’s shoes as the suave getaway driver in The Transporter Refuelled.

“That’s not something I think about,” he says. “That’s something I learnt from swimming. You put your head down and you don’t think of the person in the lane next to you. You just battle with yourself.”

The highest-paid actors of 2019 revealed
9