Review: We award this movie an extra star, just for the the chihuahua in the pink helmet 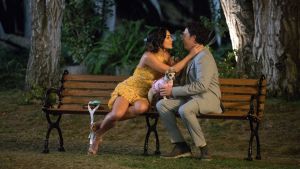 This is now officially a thing. Arriving at rear-sniffing distance from Disney’s pug-themed Brit-com Patrick, Dog Days confirms a new subgenre with a wet nose. Remember the rom-com? The 20th century form of visual storytelling that ended when Matthew McConaughey put his shirt back on? Like that. But with added dog and fewer abs.

The Los Angeles-set Dog Days unfolds as an Altmanesque daisy chain. All possible similarities with the Texan auteur behind McCabe and Mrs Miller and Nashville begin and end with choral effect.

Elsewhere, even the not inconsiderable charms of Nina Dobrev and Tone Bell can sell us on the opposites-attract romance of a morning TV presenter and her former football star co-host. Remind me again. Why are they breaking up before they make up?

Vanessa Hudgens pops up to ask the question that mankind has been grappling with for ages. Why isn’t Vanessa Hudgens in more things? Also, when will she realise that the kindly, goofy co-ordinator of the local animal shelter (Baywatch’s Jon Bass) is a much better bet than the preening dishy vet across the road?

Save for a shot of a dog with ladies underwear on his nose, Dog Days functions perfectly nicely as an all-ages show, albeit with a few nods to the parents in the room. Sappier moments and bright Saturday morning TV-friendly lighting – ow, my eyes – recall Garry Marshall’s holiday films, New Year’s Eve and Mother’s Day (not to be confused with the horror film of the same name).

The canine cast are the main draw. They are canine. They are fluffy. They get an extra star for the chihuahua with a pink helmet. If this were a goldfish movie, we’d be a lot less forgiving.

The Man Who Killed Don Quixote: Compromised and astonishingly unfinished
9