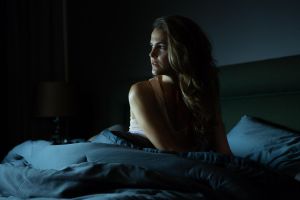 The idea of anal-probing extra-dimensional tourists flitting, unseen, around our planet, has long exerted a palpable influence on American pop culture. On this continent, however, we are most definitely alone – tout seul – and we like it just fine. At the multiplex we’ll accept vengeful ghosts, giant robots, zombie cheerleaders and almost any marauder you can think of ahead of Roswell Greys.

It’s a tribute to the qualities of Scott Stewart’s invasion feature that we’re kept onside for so much of the run time. Set in a very Spielbergian suburb (barbecues, bike rides, walkie-talkies) Dark Skies concerns a series of extraterrestrial afflictions visited upon one family.

Times are already tough for this nuclear unit: dad Daniel (Josh Hamilton) is between jobs and the mortgage is overdue; teen Jesse (Dakota Goyo) is hanging around with older, naughtier boys; realtor mom Lacy (Russell, splendid) has trouble shifting properties in a depressed marketplace.

Still, they’re getting by – until odd things start happening to and around the youngest son, Sammy (Kadan Rockett). There are curious incidents involving sleepwalking, incontinence and catatonia. There are strange occurrences with malfunctioning burglar alarms and flickering street lamps.

And then things get really freaky: Lacy can’t account for a five-hour stretch, Daniel keeps scratching behind his ear, and a thousand migrating birds kill themselves by flying into the family home.

Stewart, an SFX wiz and the director behind the Paul Bettany vehicles Legion and Priest , neatly transitions Dark Skies between wonderment and terror. Early sequences, notably an inexplicably geometric rearrangement of kitchen condiments, hark back to Poltergeist ; later scenes recall the darker hues of The X Files . Suspense is neatly tempered with pop-up scares. David Boyd’s cinematography and clever visuals keep the monster (basically American Dad ’s Roger) obscured in the shadows. The performances are wholly believable even when the premise is not.

Playing the material straight is a nice idea. At times Dark Skies ’ alien contingent function as a riposte to the bombastic visitors of Transformers and The Avengers : this might be the Greys’ very own Chronicle or Special . At other times, alas, several decades of Majestic 12 conspiracy theories work to undermine the novelty and Stewart’s best efforts. Fun, nonetheless.

The Arab-Israeli conflict in 10 points
9

Normal People: How well do you know Connell and Marianne? Test your knowledge
10