Cloudy with a Chance of Meatballs 2

Cloudy With a Chance of Meatballs 2 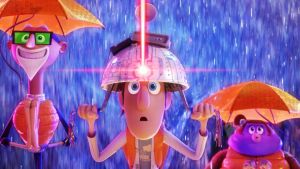 Film Title: Cloudy with a Chance of Meatballs 2

Sony Pictures Animation has a distribution deal with Aardman Animation, an arrangement that has, thus far, yielded The Pirates! Band of Misfits, and the only reason in the world why anyone might get excited by the prospect of a new movie from the doodlers behind The Smurfs, Hotel Transylvania and Open Season.

Cloudy with a Chance of Meatballs 2, a zany, DayGlo sequel to the zany, DayGlo 2009 original, arrives on a tidal wave of underwhelming 2013 cartoon features. The film’s hyperactive aesthetic and delivery – Everyone! Talks! Like! This! – marks it out from recent lacklustre rivals Justin and the Knights of Valour, Planes and Monsters University. Its wacky tone is consistently maintained. If only it had some jokes to go with the comic bluster.

Instead, the plot suffers from major symptoms of sequelitis: mad inventor Flint (Bill Hader) and his chums are ordered to leave their hometown now that Flint’s food-making machine has created a Jellyocalypse. Then, for some suspicious reason, celebrity scientist Chester V (a parody of Steve Jobs replete with evangelical following) orders Flint to retrieve the trickily named machine – the FLDSMDFR – which is now producing sentient animals. Got it? Erm.

It’s hardly the neatest plot device. And there’s nothing neat about the execution. The novelty of the first instalment has given way to a lazy “putting the band back together” narrative. Except we’re not entirely sure who’s in the band. We do know who isn’t: we’ve lost Bruce Campbell and Mr T – two of the main players from the 2009 film. The likeable folks who have returned (Mr Hader, Anna Faris, NPH) do just enough to persuade us that this is more than a straight-to-video cash-in. But too often they’re working against an underwhelming screenplay.

The original Cloudy didn’t have the warmth of Despicable Me or the snark of Shrek. But it did have more humour than this new film. No matter: we’ll take lesser Cloudy sequel over Justin and the Knights of Valour any old day.