Closeness: No film will top this drama for walkouts and jeering

A clip from 'Closeness', directed by Kantemir Balagov. 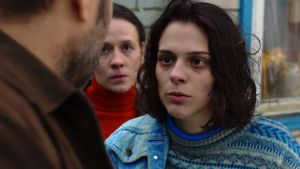 Zhovner and Zhukov have such terrific onscreen chemistry, one can’t help but yearn for more Romeo and Juliet and of the less of the suffocating family drama that comes to dominate the film

We might as well pack up and go home. No film is going to top Kantemir Balagov’s heavy-hearted, heavy-going period drama for walkouts and jeering. Closeness opens with autobiographical notes from the filmmaker playing over images of a grimy North Caucasus town.

It’s 1998 in the Kabardino-Balkar Republic, and mechanic Ilana (Darya Zhovner, an absolute firecracker) is making her way home from the garage where she works with her beloved father, Avi (Artem Tsypin). After some highly inappropriate horseplay with her brother David (Veniamin Kats), Ilana’s pathologically overbearing mother selects a hideous dress for her dungaree-happy tomboy daughter.

The occasion is David’s engagement to his childhood sweetheart, Lea. Sadly, within hours of the celebration, the young couple has been kidnapped and the family must rely on their small Jewish community to help raise the ransom.

Hard choices lie ahead. There is talk of selling the garage and of marrying Illana off.

She responds by partying even harder with Zalim (Nazir Zhukov), the boyfriend her mother dismisses as a ‘nard’. Roughhousing and messing aside – she bites him hard on the lip; he locks her in the boot of his car - Zalim is generally a sweet fellow, though the jihadi-influenced pop he and his friends listen to suggest he’s from a very different background than Ilana.

During one mad session, after the bong has been passed around and around, the gang sit down to watch a horrific snuff video – actual footage from the 1999 Dagestan massacre - in which Chechens torture Russian soldiers. (This scene prompted dozens of walkouts, with more than one disgruntled viewer shouting in protest as they left the premiere.)

That particular sequence may be ethically questionable, but if anything, the film might have made more of its ethno-cultural divisions and specifics. Zhovner and Zhukov have such terrific onscreen chemistry, one can’t help but yearn for more Romeo and Juliet and of the less of the suffocating family drama that comes to dominate the film. Dinner table discord is powered by religious identity and generational deference: Ilana’s mother insists that (as Jews), they are guests and must know their place: “Aren’t we guests everywhere?” snarls her daughter.

Occasionally, the narrative is almost as wilfully undisciplined as its commendably rebellious heroine.  DP Artem Emilianov, accentuates the jaggedness of the drama by shooting handheld and in Academy ratio, frequently opting for odd close-ups, eye-lines and compositions. That rawness, like the film’s mesmerizingly grimy locales, has its own peculiar, aggressive charm.

Expect to see Zhovner, a wildly charismatic presence who looks like a hybrid of Kristen Stewart and Alien-era Sigourney Weaver, again and again. Too often, comtemporary Russian screen heroines are passive and practically mute: see, for example, Vasikina Makovtseva in The Gentle Creature over in the main competition. Ilana is having none of it. Stand by for the most awkward Rabbi-attended dinner imaginable.

And watch out for Kantemir Balagov, who is in the running for Un Certain Regard and the Camera d’Or. A divisive and discombobulating new talent has arrived on the Croisette.