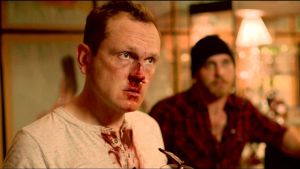 It may be an accident, but this neat, horrible, very enjoyable mid-budget thriller looks to have an antecedent in Roald Dahl’s 1948 story Man from the South. That was the one about the sinister individual who bets a younger man that he can’t successfully spark up his lighter 10 times in a row. If the hero succeeds he gets the gambler’s car. If he loses, a little finger will be severed.

The story was filmed for both Alfred Hitchcock Presents and Tales of the Unexpected and, truth be told, the scenario is better suited to the shorter form. Cheap Thrills never quite flags, but there is, in the later stages, a slightly desperate attempt to up the stakes ever further.

It begins with a car mechanic and sometime writer (Pat Healy) losing his job on the same day he receives an eviction notice. Drowning his sorrows at the local bar, he encounters an old pal (Ethan Embry) who has drifted into loan sharking.

A flash, indecently loaded ne’er-do-well (David Koechner), celebrating his girlfriend’s birthday, soon draws them into his orbit and they find themselves indulging in silly, lucrative dares. The first to drink a shot gets $50. The first to get slapped by a nearby woman picks up $100. Later, at the hood’s house in the hills above LA, they take part in much more dangerous games.

There are a few bum notes in the piece. Healy eventually offers up his finger for an implausibly meagre sum. An unlikely cookery sequence happens way too quickly. Koechner doesn’t quite make a human being of the manipulative monster. But the film-makers’ undisguised glee in the revolting catalogue of horrors is a delight to behold, and the sense of naked misanthropy is queasily invigorating throughout.

We hold one a half-thumbs (very cautiously) aloft.

Without the Blueshirts, there would have been no Fine Gael
6