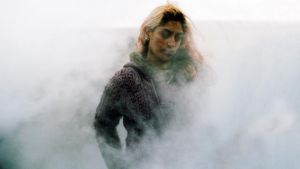 “A great bird landed here. Its song drew men out of rock, Living men out of bog and heather.”

This tremendous debut feature by British brothers Daniel and Matthew Wolfe opens with a deadened rendition of Ted Hughes’ Heptonstall Old Church. Mist rolls over the shabby roofs of nowhere towns. Most of the film’s characters live in mobile homes surrounded by gorse and heather. They subsist on milkshakes and anything that dulls the pain: prescription pills, weed, alcohol, cocaine and cheap crystallised concoctions.

This is recognisably Hughes’ Yorkshire: its pitiless poetry is ever ready to engulf its unfortunate human inhabitants. But it is equally the tramping ground of Emily Brontë, where the darkest nights harbour and hide runaways and doomed romantics not unlike the youngsters at the heart of this riveting thriller. Neither Brontë nor Hughes knew that their moors would someday host a sizable Asian community.

As it happens, several of this film’s British-Pakistani characters, ought to feel right at home with Hughes’ brutal imagery. 17-year-old Laila, played by charismatic newcomer Sameena Jabeen Ahmed, has left behind her Pakistani family and their West Yorkshire kebab shop to be with her white boyfriend Aaron (Conor McCarron). Her father, we soon learn, has summoned a rescue posse that includes Laila’s brother, Zaheer (Ali Ahmad) and three Asian friends, plus hired goons Barry (another terrific newcomer, Barry Nunney) and Tony (Billy Elliot’s Gary Lewis).

We can guess, by the human-sized plastic sheeting, that the Pakistani crew have been dispatched with “honour killing” in mind.

We can also surmise that either Zaheer or the coke-snorting Gary, who occasionally stares at a photo of an unidentified girl, either dead or estranged from him, may be too soft for the mission.

Unhappily, what begins as a kitchen sink riff on John Ford’s The Searchers, quickly escalates into a full-blown Shakespearean tragedy.

Taking a cue from the windswept landscape and the everyday poetry of Irish cinematographer Robbie Ryan, Daniel Wolfe finds a monstrous beauty in grim details: a bird of prey feasting on squawking new-born flesh, the hum of caravan generators, the pitchfork-tended fires on the horizon.

The performances are all compelling, though Sameena Jabeen Ahmed is a revelation. Her freak-out dance to Patti Smith’s Horses, as choreographed by FKA twigs, is more than worthy of the track and her final, tearful scene is unspeakably powerful.