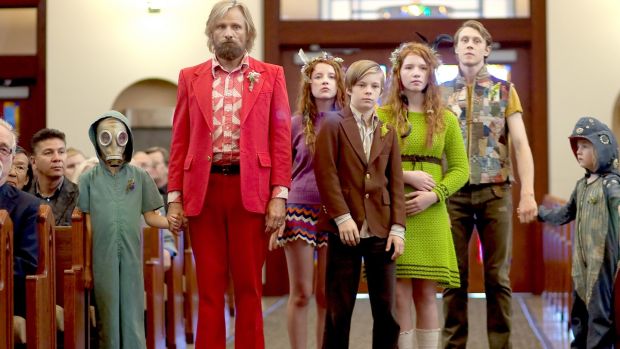 All for one: Viggo Mortensen and family in Captain Fantastic

Never mind religion and politics. If you want to wade in to the mother (and father) or all rows, then go have a pop at someone else’s parenting style, a minefield where the difference between diluting orange juice to three parts or five parts water can make you into history’s greatest monster. Hang on. Orange juice? Are you trying the kill the child? And so on.

Such thoroughly modern and hard-fought battles form the dramatic spine of this wonderful new drama. At first glance, Captain Fantastic looks awfully like a Little Miss Sunshine for Marxist survivalists: Ben Cash (Viggo Mortensen) is an academic who has opted out of the rat race in favour of off-the- grid living in the Pacific Northwest. His six children climb mountains, run uphill, hunt, read classic literature, study physics and celebrate Noam Chomsky Day instead of Christmas.

It’s tough love, and it gets even tougher when Ben receives news that his wife, who was hospitalised for depression, has killed herself. Despite firm warnings from his father-in-law (Langella), Ben and the family opt to drive to New Mexico for the funeral.

Along the way they encounter fat people (“What is wrong with them?” asks one of the kids, “Are they sick?”), and relatives who want Ben to give the children a “normal life”.

Ross’s screenplay deftly juggles politics, family drama and comedy until a musical denouement, which might, with a different cast and director attached, have been excruciatingly cheesy.

It would be easy to praise Mortensen, as the starriest name in the credits, but Captain Fantastic is very much an ensemble piece, wherein even the smallest turns enrich the material. Stéphane Fontaine, Jacques Audiard’s regular cinematographer, makes great use of American vistas; Alex Somers score manages a similar aesthetic impact.

House of Cards’ Robin Wright: ‘I think the crack in the glass ceiling is getting bigger’