Bjork: Biophilia Live review - as exhilarating as a concert films gets 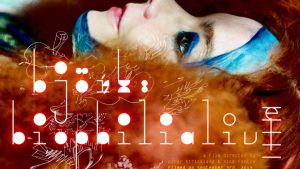 Dressed in something that might have been stitched together from fragments of The Prisoner’s rover balls, Björk twinkles from under a joke shop rainbow wig, her face circled with thick blue lines. If Jean- Paul Gaultier ever gets around to doing a guest collection for Claire’s, this is how we picture the look book. Biophilia Live marks the end of the Icelandic artist’s 2013 tour. Playing in the round at London’s Alexandra Palace, she appears against swirls of stars and rivers of lava, adding consonants were there were none before: how many Rs are in miracles, anyway?

Co-directors Peter Strickland and Nick Fenton don’t need to add any SFX: this is a most spectacular biology lecture with Professor B standing before images of fungi, starfish and DNA chains. “As the protein transmutates,” she purrs. This is unlikely to change hearts and minds among those who think she sounds like a bag of cats. It is, however, as visually and sonically exhilarating as concert films get.