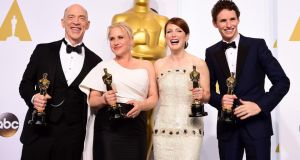 Alejandro G Iñárritu’s Birdman or (The Unexpected Virtue of Ignorance), a dizzying tale of Broadway composed as if shot in one continuous take, has won best picture at the Academy Awards in Los Angeles.

Iñárritu took best director, but Michael Keaton, who stars as the title character in Birdman, lost best actor to Eddie Redmayne for his turn as Professor Stephen Hawking in The Theory of Everything.

Birdman tied for the most number of Oscars with Wes Anderson’s beautifully composed period comedy The Grand Budapest Hotel. Both took four awards. For the first time since the Academy increased the number of best picture nominations from five, each of the eight pictures in the most important race secured at least one Oscar.

Until a few months ago, Linklater’s film, which follows its title character over 12 years, looked close to unbeatable, but, after triumphing with professional bodies such as the Directors Guild of America, Birdman went into the weekend as narrow favourite. In the event, the results proved to be enormously predictable. Only two or three of the 23 awards went to any thing other than the bookies’ favourite. Simmons, Arquette and Moore were all at unbackable odds.

It was a strange sort of ceremony. Many had wonder if Neil Patrick Harris, the popular host, would refer to the controversy surrounding the exclusion of any people of colour from the acting nominations. In the event, he referenced that furore - heightened by just two nominations going the way Ava DuVernay’s civil rights drama Selma - in the very first sentence of his monologue. Harris welcomed “Hollywood’s best and whitest… erm, best and brightest” to the ceremony at the Dolby Theatre in Hollywood.

One of the night’s emotional high points came when Common and John Legend performed the song Glory from Selma. A slightly guilty audience leaped to its feet following the number, which was sung before a mock-up of the bridge in Selma, Alabama across which Martin Luther King marched his supporters in 1965. The performers then gave a powerful speech as Glory’s triumphed in the best original song category. “Selma is now,” Legend said. “The struggle for justice is now. The Voting Rights Act that they fought for 50 years ago is being compromised right now in this country today.”

There were other moving orations. “It’s our time to have wage equality once and for all and to fight for equal rights for women in America,” Arquette said in passionately delivered acceptance speech. Graham Moore, receiving the best adapted screenplay Oscar for The Imitation Game, drew an equally positive response from the audience. “I tried to commit suicide at 16 and now I’m standing here,” he said. “I would like for this moment to be for that kid out there who feels like she doesn’t fit in anywhere. You do. Stay weird. Stay different.”

Away from the hot politics and the surging emotions, this year’s Oscars were a bit of a damp squib. Lady Gaga sang an unlikely, tuneful tribute To The Sound of Music, 50 years old this year, and was congratulated by Julie Andrews with apparent sincerity. But her singing was just good enough to cause viewers to wonder why the Academy hadn’t asked somebody with a genuinely brilliant voice. One of the better gags saw John Travolta, who famously mispronounced Idina Menzel’s name last year, join the singer to be gently ribbed and to announce the winner for best original song.

None of this could distract from the fact that Neil Patrick Harris, an experienced presenter of Tony and Emmy ceremonies, was floundering throughout. An initial song and dance number went off very well. Then the one liners began to fall flat. An achingly extended gag involving Oscar predictions hidden in plain view - presumably an attempt to kick up the same energy as last year’s famous selfie - proved confusing, distracting and underwhelming. An attempt to involve David Oyelowo, the British actor who failed to receive a nomination for playing King in Selma, felt forced and patronising. By the close, Harris had the frightened look of a man who had just stepped off the kerb into oncoming traffic.

None of which will do anything to flatten Mr Iñárritu’s mood. Following Alfonso Cuaron’s victory last year for Gravity, this is the second ceremony in a row that has seen the best director prize go to a Mexican film-maker. “Ego loves competition, because for someone to win, someone has to lose,” he said. “But the paradox is that true art can’t be compared, can’t be labelled, can’t be defeated. My work and the work of my fellow nominees will be judged only by time.”

There was no success for the two Irish contenders. Tomm Moore’s Song of the Sea, nominated for best animated feature, lost to Disney’s Big Hero 6. Michael Lennox’s Boogaloo and Graham, up for best live-action short, was outpaced by the pre-match favourite The Phone Call. The film-makers will, however, have been happy to attend one of Oscar’s more peculiar editions.

Dating Amber: A story about two gay teenagers, being each other's beards
10

Great reads: 20 books to unwind with this summer
Real news has value SUBSCRIBE