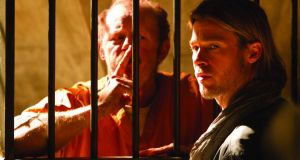 We’ve been preparing this week’s column for close to a year. Delayed, delayed again, drastically rewritten, its budget soaring madly out of control, World War Z looked set to be the great cinematic catastrophe of our era. Brad Pitt, producer and star, surely couldn’t save the zombie epic. After all, he could, serving in both those capacities, save neither Killing Them Softly nor The Assassination of Jesse James by the Coward Robert Ford. And they got ecstatic reviews.

World War Z, allegedly a bastardisation of Max Brooks’s novel, seemed to be heading for a critical roasting. So convinced of apocalypse were our friends at Vanity Fair magazine that they wrote the film’s lengthy obituary in a cover story more than a month ago. John Carter, Disney’s 2012 disaster, would seem like The Avengers in comparison.

Things have turned out somewhat differently. World War Z trousered $66 million on its debut weekend in the US and, if the Hollywood Reporter is to be believed, now looks likely to generate a sequel. Somewhat astonishingly, it’s also clocked up the biggest opening for any original, live-action picture since Avatar in 2009. The reviews were also much better than expected. All involved can be congratulated for plucking victory from the slavering, blood-hungry jaws of defeat.

So, what are the lessons here? Well, a trivial one concerns (yes, this again) the sad preponderance of remakes and sequels. Heed this. That $66 million puts World War Z at just No 73 in the all-time chart for opening weekends. A tiny handful of “original, live-action” films – Twilight, The Hunger Games, Avatar itself – occupy higher positions, and each one has spawned its own franchise of sequels. (New Avatar episodes are currently in production.)

We will observe the progress of Guillermo del Toro’s Pacific Rim and Neill Blomkamp’s Elysium with cautious interest. Should those upcoming “original live-action” epics succeed, then we may be facing a minor (excuse the garbage-speak) paradigm shift.

Less depressingly for Hollywood, the relative success of World War Z confirms that star power is not entirely a thing of the past. True, Will Smith – among the most bankable of actors – couldn’t save After Earth from oblivion. But the presence of Brangelina on red carpets certainly helped lodge World War Z in the public consciousness. We may feel slightly queasy that the coincidence of Angelina Jolie’s recent double-mastectomy kicked the story onto the front pages, but here was evidence that old-school glitter still registers.

More than anything else, however, the story confirmed that the public doesn’t pay any great attention to trade gossip. It’s always been said that “troubled productions” give off a stink that scares away punters. In truth, the average filmgoer cares little about rewrites, budget crises or fistfights between executive producers.